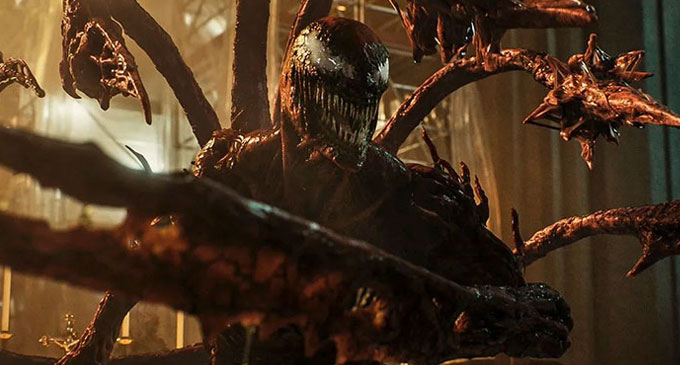 “Venom” Sequel To Run Quite Short

(FASTNEWS | COLOMBO) – As revealed on AMC and Fandango websites, the Tom Hardy-led Marvel and Sony sequel “Venom: Let There Be Carnage” will clock in as one of the shortest superhero movies to date.

Set to open on October 1st, the new film reportedly holds a total running time of just 90 minutes, a full 22 minutes shorter than its predecessor.

“His arms and legs have the same priority as his other tentacles. He’s like the Vitruvian Man. Ultimately it’s like fighting a creature who is made of barbed wire and like a bramble bush – he’s so vicious and weaponized and powerful and dangerous. Even if he just swipes you with a tentacle, he’s all covered in razors and barbs, you’re just going to stick to him and be torn to shreds.

One of the ideas we had for Carnage was that he would evolve throughout the film and grow his own weapons. As he becomes more and more powerful, he propagates more and more weapons, more barbed and dangerous, and his human form becomes less and less apparent. He can grow a spear from his spine, then pull it out and use it like a javelin, and it just grows back. He can grow other weapons, or eject them as projectiles.”