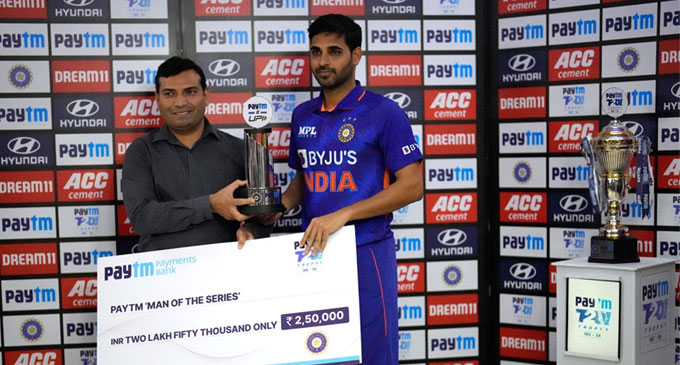 (FASTNEWS | COLOMBO) – Bhuvneshwar Kumar was rewarded for his strong performance in the South Africa T20I series with the player of the series award, his fourth time winning this award in any international series across all formats.

Bhuvneshwar took 6 wickets in the four matches played, including a four in the second T20I in Cuttack, where three of his dismissals were bowled.

Although Harshal Patel ended the series with most wickets, Bhuvneshwar was the most impressive Indian pacer on his return to the team, delivering two or three overs in the powerplay and managing to remain economical despite the attacking lines and lengths he bowled.

Bhuvneshwar ended the series with only 85 runs conceded in 14 overs of bowling, a very impressive performance going at just about run-a-ball against a powerful Proteas batting lineup.

He delivered performances which set the tone for the rest of his bowling unit, keeping the South African batsmen uncomfortable and not allowing them to take advantage of the powerplay. Even in the games India lost, South Africa depended on the middle order to score runs at the death after a poor start due to Bhuvneshwar’s success in the powerplay.

In the previous occasions Bhuvneshwar won the player of the series in 2013 in a tri-series against Sri Lanka and West Indies, in 2014 he took 6/82 at Lord’s in Tests against England, and against South Africa in 2018, including a five-wicket haul.

Kumar has been rewarded for his strong performances against South Africa this year with the responsibility of being India’s vice-captain on the tour to Ireland, acting as deputy to Hardik Pandya.

He is certain to be among the wickets yet again in the swinging conditions of the British Isles as India play a limited-overs series in England soon after as well.