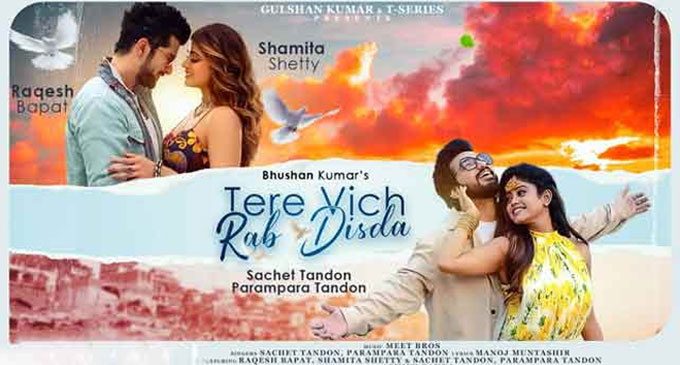 (FASTNEWS | INDIA) – Shamita Shetty and Raqesh Bapat’s much-awaited music video ‘Tere Vich Rab Disda’ is now out. The song is composed by Meet Bros, with vocals by singers Sachet-Parampara who also feature in the video, and lyrics by Manoj Muntashir.

Shot at colourful locales in Haridwar and directed by Ashish Panda, ‘Tere Vich Rab Disda’ takes audiences through a sweet love story and an open declaration of love. Shamita and Raqesh showcase romance with their electric chemistry, which is a major highlight of the song.

Producer Bhushan Kumar says, “All the pieces for this track seamlessly fell into place. The collaboration between Meet Bros and Sachet Parampara and the onscreen pairing of Shamita Shetty and Raqesh Bapat, is a dynamite combination and audiences are going to enjoy Tere Vich Rab Disda.”

Composer duo Meet Bros feels, “Tere Vich Rab Disda is a very breezy, easy-listening romantic track and who better than Sachet-Parampara to express those sentiments with their vocals.”

Sachet-Parampara too said, “After our track with Meet Bros last year we looked forward to collaborating with them again and thanks to Bhushan Kumar we found the perfect song with Tere Vich Rab Disda.”

Shamita, who features in the video with Raqesh says “It has been an extremely enriching and satisfying experience working on this project. It is a beautiful song with an extremely fun vibe, we as a team, have attempted to capture the essence of love and romance through the music as well as picturization.”

”From peppy beats, picturesque locations to striking colours, the song exudes an entertaining spirit and I can’t wait for the audience to experience the liveliness of it.”

“It felt like a celebration on the sets because the locations were vibrant and the energy was great. The team involves some of the biggest names in music industry and it was a pleasure to be part of the song.”