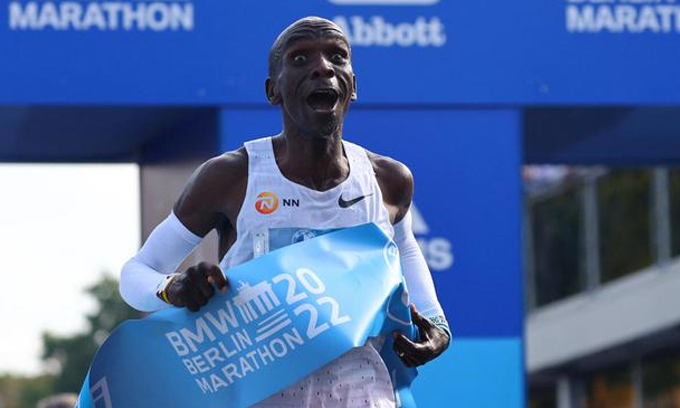 ‘One rabbit at a time’: Eliud Kipchoge coy on future after marathon record

(FASTNEWS |  BERLIN) – Kenyan great Eliud Kipchoge smashed his own marathon world record in Berlin on Sunday but was coy over future plans and tackling the mythical two-hour mark saying “one rabbit at a time”.

The 37-year-old was on fire on an autumnal morning in the German capital, lowering his old mark by half a minute with a new best time of 2hr 01min 9sec.

He told the post-race press conference “you will see” what will come next, but hinted Berlin had not seen the last of him.

“I am African and in Africa we believe you chase one rabbit at a time,” a smiling Kipchoge said.

“So the rabbit we chased as a team was the Berlin Marathon 2022.

At the halfway point the back-to-back Olympic champion in Rio and Tokyo looked set to become the first to officially run under the elusive two-hour mark.

But despite slowing slightly, Kipchoge held on to best his own record of 2:01:39 from Berlin in 2018.

In the women’s field, Ethiopian Tigist Assefa ran the third fastest time in history, setting a course record of 2:15:37.

Assefa was not among the pre-race favourites and sensationally beat her previous best by 18 minutes.

Kipchoge said he was the “happiest man” when he crossed the finish line and had “no regrets” about coming so close to the two-hour mark.

He thanked the “wonderful” locals for their support, saying “Berlin is the best”.

“Berlin is a place where anybody has a chance to push their limits,” added Kipchoge, who has now won the event a record-equalling four times.

“I always say I don’t believe in limits, I know what limits are, I always say no human is limited.”

Kenyan Mark Korir finished second behind his countryman with a time of 2:05:58, while Ethiopian Tadu Abate came third with 2:06:28.

Ethiopian Andamlak Belihu, who kept up with Kipchoge for around two thirds of the race, held on for fourth.

Korir thanked Kipchoge and the people of Berlin for “a fantastic race”.

“I am so happy to have run with a legend,” Korir said.

Kipchoge, who on Friday said his only goal was “to run a good race”, burst out of the blocks, clearly aiming not only for a world record but to beat the two-hour mark.

A pod of around seven runners kept up with Kipchoge for the first 10 kilometres, before 2021 winner Guye Adola and Belihiu pulled away after 15 kilometres.

Adola was unable to maintain the pace and began to fall back after 18 kilometres, with both Kipchoge and Belihu reaching the half marathon mark in less than an hour.

Kipchoge emerged on his own after 25 kilometres and was still on pace for the sub-two-hour, but began to slow slightly despite still keeping the world record in his sights.

He joined Ethiopian Haile Gebrselassie, who owned the event from 2006 to 2009, as the only men to have won four Berlin Marathons.

He boasts an unmatched record over the marathon, having now won 15 of his 17 career outings over the event, including not only his two Olympic triumphs but also 10 World Marathon Majors victories.

The women’s field was also one of the fastest in marathon history, with four women led by Assefa beating the two hour and 20 minute mark.

Only one of the women taking part in Berlin, American Kiera D’Amato, had previously run under the landmark time.

Kenyan Rosemary Wanjiru came second with a time of 2:18:00 in her first ever marathon, making it the second fastest debut time ever recorded by a woman.