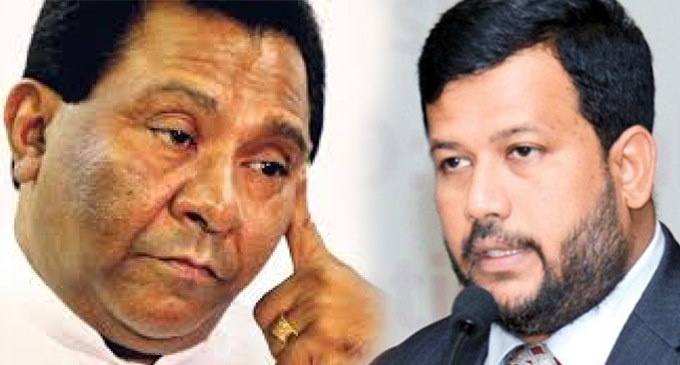 (FASTNEWS|COLOMBO) – Deputy Minister of Development Strategies and International Trade, Nalin Bandara Jayamaha at a television programme on Thursday (23) revealed details of telephone conversation which came about when Minister Rishad Bathiudeen was asked to switch allegiance in Parliament.

The Deputy Minister released the audio recording as evidence to prove that the United People’s Freedom Alliance (UPFA) Parliamentarian S. B. Dissanayake had urged the incumbent Minister of Industry and Commerce, Resettlement of Protracted Displaced Persons, Co-operative Development and Vocational Training and Skills Development, to switch allegiance.

The audio recording includes a telephone conversation which had taken place between Dissanayake and Minister Bathiudeen.

The State Minister of Agriculture, Irrigation and Rural Economic Affairs, Ameer Ali Shihabdeen speaking in Parliament on Wednesday (22) also pointed out that if Minister Bathiudeen crossed over to the Opposition during the 52-day purported Government in October last year, the circumstances surrounding the baseless allegations on Minister Bathiudeen would have been different.

The United National Party (UNP) Parliamentarian Palitha Range Bandara earlier released to the media an audio recording of the conversation he had with Dissanayake who had offered him a Cabinet Ministerial Portfolio to crossover.

In the conversation that went viral on social media generating much disgust and ridicule, it can be heard that Dissanayake advising Range Bandara to crossover before long to receive a Cabinet Ministerial Portfolio.