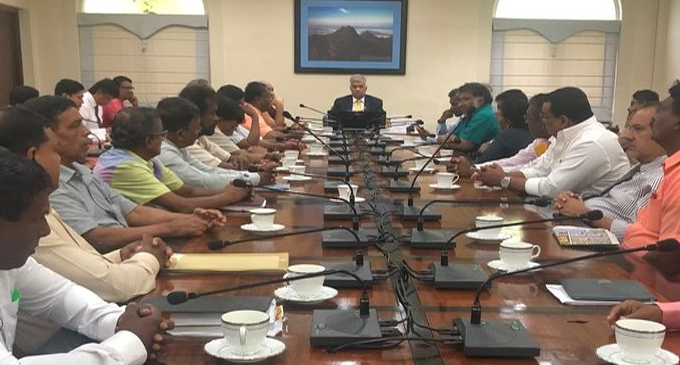 (FASTNEWS|COLOMBO) – Prime Minister Ranil Wickremesinghe says the Cabinet of Ministers does not have the authority to intercede in a Parliamentary Select Committee.

Speaking during a discussion with the Civil Society and Trade Union Collective Premier Wickremesinghe said the government is committed towards ensuring the sovereignty of the public and Parliament.

The Prime Minister said the government has ensured stability within the country as a result of immediate measures taken following the Easter Sunday attacks.

Premier Wickremesinghe noted steps will be taken to curtail future threats of extremism and terrorism.

The Prime Minister said moving forward all decisions will be based on the recommendations of the Chief Prelates, the Maha Sangha and other religious leaders with the support of all factions.

The Prime Minister stressed the public has expressed their disappointment in all 225 Parliamentarians adding the matter should be addressed appropriately.

The Premier on a separate note said concerns have arisen over the arrest of certain individuals with no links to the Easter Sunday attacks adding therefore relevant officials were instructed to expedite investigations and legal proceedings over such individuals.

Speaking to a prominent online news portal in the isle,  Convenor of the Collective Saman Rathnapriya said its members requested Premier Wickremesinghe to not allow the President to interfere in proceedings of the Parliamentary Select Committee and to ensure the continuation of its proceedings.

Rathnapriya meanwhile commended the Parliamentary Select Committee adding the real perpetrators are being gradually revealed through the proceedings of the Select Committee.

The Convenor stressed it is important for the Select Committee to table recommendations to prevent possible terror attacks in future.