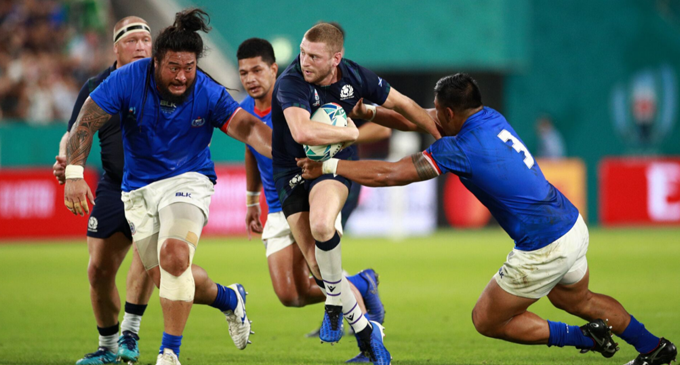 (FASTNEWS | COLOMBO) – Scotland’s hooker Fraser Brown runs with the ball during the Japan 2019 Rugby World Cup Pool A match between Scotland and Samoa at the Kobe Misaki Stadium in Kobe on September 30.

Kobe, Monday: Scotland revived their Rugby World Cup campaign with a decisive 34-0 win over Samoa in Kobe on Monday that saw the Pacific islanders finish a man down.

The bonus point win for Gregor Townsend’s men could prove vital in a tight Pool A that also involves Ireland and hosts Japan.

Victory was all but assured after a burst of 17 points in eight minutes late in the first half left Scotland 20-0 ahead at the interval.

Scotland wing Sean Maitland and Greig Laidlaw scored tries, both converted by the fly-half who also kicked an early penalty, before fullback Stuart Hogg landed the Scots’ first Test-match drop goal for more than five years with an audacious effort from just inside the halfway line.

“We’re all delighted to get that bonus point. It means we’re still in this World Cup,” said Scotland coach Townsend.

“We’ve two games to go and if we play like we did tonight and improve a couple of aspects, we’re very much in this World Cup.”

The Scots were in desperate need of a victory to have any hope of reaching the quarter-finals after starting this World Cup with a woeful 27-3 loss to Ireland — who were in turn the victims of a shock 19-12 defeat by hosts Japan that threw Pool A wide open.

The Pacific islanders were without centre Rey Lee-Lo and hooker Motu Matu’u after the pair received three-game bans for shoulder-led hits in a bruising 34-9 win over Russia.

It looked as if Laidlaw’s ninth-minute penalty would be the lone score of a first half where both sides struggled to hold on to the ball in humid conditions under the closed roof of the Kobe Misaki Stadium.

In the error-strewn early exchanges, the biggest cheers went to a spectator playing the bagpipes, a traditional Scottish instrument.

But the character of the match changed on the half-hour mark when Scotland became the 20th — and last — team at this World Cup to score a try.

Fly-half Finn Russell’s superbly-judged cross-kick was caught by Maitland, who held off opposing wing Belgium Tuatagaloa for a try in the left corner.

Russell made a darting break before finding the recalled Jamie Ritchie.

The openside flanker’s clever inside pass released Laidlaw, who fended off a poor challenge from Samoa fullback Tim Nanai-Williams before crossing by the posts for a try he converted.

Then, with nothing else on, Hogg dropped a goal from wide out on the left from just inside halfway, a distance of some 50 metres with the angle, to make it 20-0.

It was Scotland’s first drop goal in an international since Duncan Weir’s match-winner against Italy in March 2014.

Scotland, who have now won all four of their World Cup matches against Samoa, went further ahead before the hour.

Following a catch and drive off a close-range line-out, French referee Pascal Gauzere, after consulting the television match official, awarded a penalty try and sent Fidow to the sin-bin — Samoa’s third yellow card in two matches — for collapsing the maul.

Samoa reserve scrum-half Pele Cowley then came off the bench to play against his cousin Maitland for the first time in a Test but could not inspire his lacklustre side.

Instead Scotland had their second penalty try when Fidow went in knees first as Maitland tried to slide in at the left corner only to lose possession under the illegal challenge. Gauzere showed Fidow a second yellow card and then a red.

“We’ll go back to the drawing board and have a look where we went wrong,” said Samoa coach Steve Jackson.

“But you’re only as good as the opposition lets you and we played a very good Scotland side today.” AFP