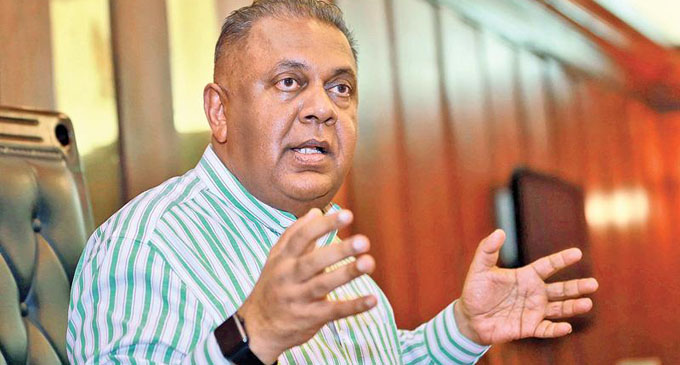 Issuing a media communiqué, Samaraweera pointed out that though Gotabhaya Rajapaksa dismissed Sri Lanka’s commitments to Resolution 30/1, “the Resolution contains a series of measures covering reconciliation, rule of law, security and confidence-building that is necessary for the long-term development of our nation”.

“Rajapaksa also dismissed the need to address the grievances of families from all parts of our country whose loved ones including security forces personnel are missing. With the arrogance of an authoritarian regent, he remarked that the ‘people in the North and East have more important issues: jobs, education, etc, and we can’t hang on to old things; we have to move forward’. By saying this, he claimed that he and he alone knows what is best for each and every individual citizen in this country including how they should think and feel including in the face of personal tragedy.

“Could any citizen actually say that allegations should not be investigated when we are bound by our own Constitution to provide for the equal protection of the law? Shouldn’t we do justice to all our citizens including our Security Forces personnel by investigating allegations so that those who may not be guilty of a crime do not have to carry the weight of an allegation with them to the grave? Should we let allegations remain without investigations and make our security forces personnel vulnerable to be subjected to universal jurisdiction?”

“It is as a result of Resolution 30/1 that prospects for international action initiated through resolution 25/1 of March 2014 and the OISL (OHCHR Investigation on Sri Lanka) that was adopted during President Rajapaksa’s regime was effectively halted. It is important to remind everyone that it is only if we as a responsible and sovereign nation fail to act that we place our citizens in grave peril by allowing space for others to step in, and international action as well as universal jurisdiction to apply.

“The former Government failed to address the grievances of citizens of all communities in our country as undertaken in May 2009. The then Government also failed to restore the honour of our security forces and police, by investigating allegations in terms of the due process of the law so that action is taken against those who have committed crimes, and others do not have to suffer in disgrace for years to come.”

“Non-implementation of recommendations of the Presidential Commissions appointed by President Mahinda Rajapaksa resulted in the erosion of trust and confidence resulting in a series of resolutions in the Human Rights Council on Promoting Reconciliation, Accountability and Human Rights in Sri Lanka in 2012, 2013, and 2014. By December 2014, Sri Lanka had become isolated on the international stage.”

“It was in this backdrop that the Government presented its own proposals and co-sponsored Resolution 30/1 to regain and reassert Sri Lanka’s sovereign right to solve its own problems locally, so that space for any further international action or strictures would not be open. This was the path to establish durable peace and reconciliation in our country, restore Sri Lanka’s dignity on the international stage as a state that takes responsibility to address the problems of all sections of its own citizens, renew Sri Lanka’s engagement with the international community, rebuild eroded trust and confidence, restore the dignity of our security forces, police and judiciary, and usher in the sustained stability required for investor confidence and durable prosperity for all our citizens.”

“In 2015, Sri Lanka ceased to be the pariah nation we were in the period immediately before that where we were fighting everyone and cornering ourselves. We took control of the accountability and reconciliation agenda, and we put the world as our witness. We regained our place as a responsible sovereign nation alongside the rest of the world, because we had regained our heart, and our identity as a compassionate, proud, diverse nation, full of hope and inspiration to march forward, holding our heads up high, to be the best that we could be.