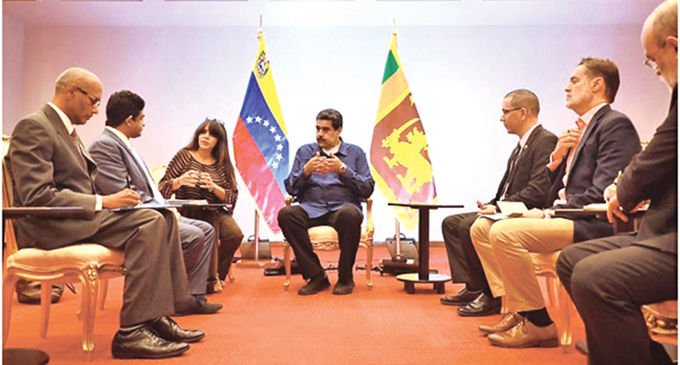 State Minister Senanayake held bilateral meetings with the Venezuela Vice Minister on October 4 at the Yellow House “Antonio José de Sucre” where they continued earlier discussions on the bilateral relationship of the two countries.

The Ministers exchanged views on the bilateral relationship and on new areas of cooperation which includes agriculture, textiles, sports and tourism. They agreed to set up a mechanism for regular political consultations. It was also agreed to consider signing an agreement for exemption of Visa requirements between the two countries to facilitate travel and to promote people to people contact and tourism.

The Venezuelan Minister emphasized the need to intensify the engagement through the exchange of high-level visits and business delegations. He proposed that the Sri Lankan apparel industry be expanded to Venezuela similar to Sri Lanka’s entry to the industry in Honduras, Dominican Republic and Haiti.

The Venezuelan Minister explained the responsibilities of Venezuela towards other countries in the Latin American region. The State Minister conveyed Sri Lanka’s willingness to help develop the gem industry in Venezuela by bringing Sri Lankan lapidarists to provide technical know-how.

During the meeting State Minister Senanayake proposed a youth exchange programme between the two countries and stated that Sri Lanka facilitates such programmes with several countries. The Venezuelan side agreed to send a proposal on exchange of youth delegations.

State Minister Senanayake also paid a courtesy call on the Venezuelan President Nicolas Maduro. President Maduro during the call, suggested that the two countries explore ways to strengthen the relationship with Sri Lanka. State Minister agreed with the President and conveyed the best wishes of President Maithripala Sirisena to the President, the Government and people of the Bolivarian Republic of Venezuela.