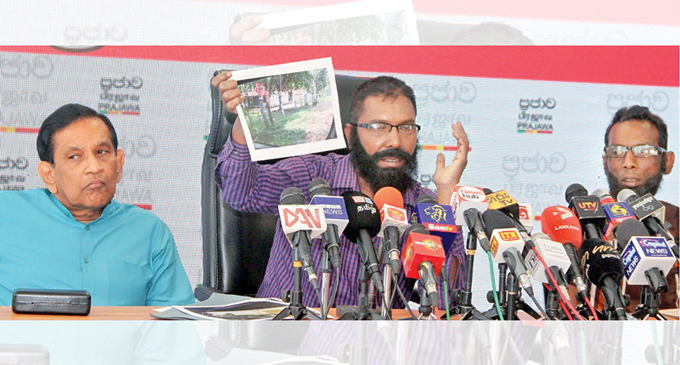 (FASTNEWS | COLOMBO) – The Government will begin investigations into the rest of the murders and abductions committed during the Rajapaksa era after its affirmation in power on November 17, Health, Nutrition and Indigenous Medicine Minister Dr. Rajitha Senaratne said yesterday (10).

The Minister stated this addressing a dramatic special press conference in Colombo at which the flamboyant Minister presented to the news media two persons he claimed were a ‘White van’ driver and a victim of an attempted abduction in such a white van. The news briefing was held at the office of Minister Senaratne’ own Democratic National Movement in Colombo.

The Minister also said there was yet little information as to what had happened to the estimated 7,000 metric tons of gold bullion reportedly seized from the possession of LTTE leader Prabaharan during the previous regime’s operations against the LTTE. Declaring that this gold treasure so far remained a mystery, the Minister said that investigations would also begin into this matter.

The Minister introduced to the media a person called Anthony Fernando, ostensibly a driver of a white van that was a much-reported feature of many political abductions and assassinations during the Rajapaksa era. Also introduced was another man called Athula Madanayake who was allegedly a victim of a white van abduction but had been later released.

Fernando told the media that the abductions and murders that took place during the Rajapaksa regime were apparently carried out in accordance with the orders of former Defence Ministry Secretary Gotabaya Rajapaksa.

A Brigadier and a Major of the Army had seemingly played a role in these political crimes.

Those who were abducted were subjected to serious harassment and torture and killed later in the torture houses located in various parts of the country, Fernando said. According to him, at such a site in the Monaragala area, the dead bodies of victims would then be thrown into a nearby reservoir filled with crocodiles. Fernando said he had not been able identify the exact location of this tank.

The duo told media that they made these revelations with responsibility and possessed evidence to authenticate their claims.

Minister Rajitha Senaratne pointed out that some individuals in the present government were supporting the rival party with the intention of gaining privileges.

However, he stressed that investigations into these murders and abductions would be expedited and that it was also the expectation of the young generation.