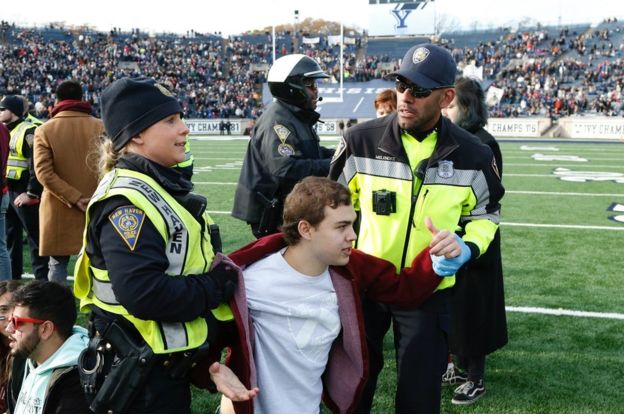 They invaded the field in New Haven, Connecticut, at half-time, demanding that the two elite US universities stop investing in fossil fuels.

As officials appealed for them to leave, spectators and some players also joined the protest, US media report.

About 50 people were escorted from the field by police, while others left voluntarily.

The protest began when dozens of students and alumni stormed the field, linking arms and holding signs reading Yale and Harvard United for Climate Justice, the Harvard Crimson newspaper reported.

Some chanted “Disclose, Divest, and Reinvest”.

Divestment refers to the shedding of stocks, bonds or other investments as a way to tackle climate change.

The protest delayed the game by about half an hour.

In a video released by the group Divest Harvard, university football team captain Wesley Osgbury said both universities were investing in industries that are “destroying our futures”.

“When it comes to the climate crisis, no-one wins,” he said.

“Harvard and Yale can’t claim to truly promote knowledge while at the same time supporting the companies engaged in misleading the public, smearing academics and denying the truth. That’s why we are joining together with our friends at Yale to call for change.” 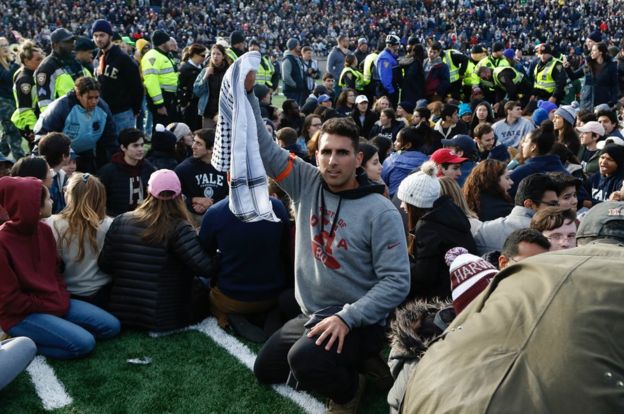 A Yale spokeswoman said that while the university supported the right to freedom of expression it did not approve of the protesters’ tactics, or the disruption of university events. (Courtesy – BBC)