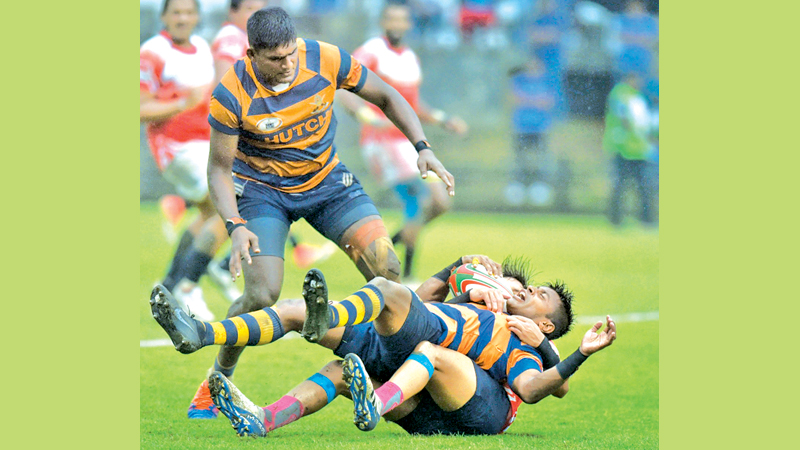 (FASTNEWS | COLOMBO) – Havelocks opened the Dialog Rugby League 2019/20 season with a solid 35-3 win against Navy at Welisara while CH and FC bounced back to snatch a 8-8 draw against Army at Racecourse grounds yesterday.

Navy were all at sea against the rampant Havies whose new-look young outfit produced a powerpacked performance scoring five tries.

“My task is to develop their capacity. If our capacity is better than the opposition we can win. We played to our strength,” said Havelocks coach Sanath Martis speaking to the Daily News after the match.

Last season’s league runners-up fired on all cyliners romping to a 21-3 lead at the interval. Hooker Azmir Fajudeen opened the floodgates when he crashed over the line from a maul.

Havelocks displayed their eagerness to run with the ball at every given opportunity despite slippery conditions underfoot caused by persistent rain. The backs ran riot after the forwards foraged the ball from set pieces and in the loose.

Skipper Mithun Hapugoda put the finishing touches to a sweeping move while centre Randy Silva also crossed the line in the first half.

Winger Ramesh Fernando and centre Eranga Ariyapala also breached the Navy defence in the second half with full back Prince Chamara making no mistake with the conversions to add the extra points. Fajudeen was adjudged player of the match.

Army drew first blood at Racecourse with fly half Ashan Bandara scoring a sizzling try with a thundering run after 15 minutes.

The Sri Lanka player stunned home fans by slicing through the defence with an angular run from the half way line to give Army a 5-0 lead.

Full back Isuru Sudumedagedera failed to goal the try but made no mistake with a penalty conversion to give Army a deserved 8-0 lead the interval.

The soldiers outgunned their more formidable rivals surprising them by spreading the ball out wide.

They handled the slippery ball caused by the showers even attacking from deep inside their territory, slipping through the CH players who were caught on the wrong foot. However, CH regrouped after the interval and got their act together after the turn around. They attacked the Army defence relentlessly and breached the defence early in the second half with prop forward Sathya Ranatunga going over from a driving maul for an unconverted try.

Full back Samuel Maduwantha converted a penalty for CH to draw level 8-8 at the beginning of the fourth quarter.

Both Army and CH missed penalties in the final stages of the match which was played under lights.

Army’s Ashan Bandara was adjudged player of the match. (DN)