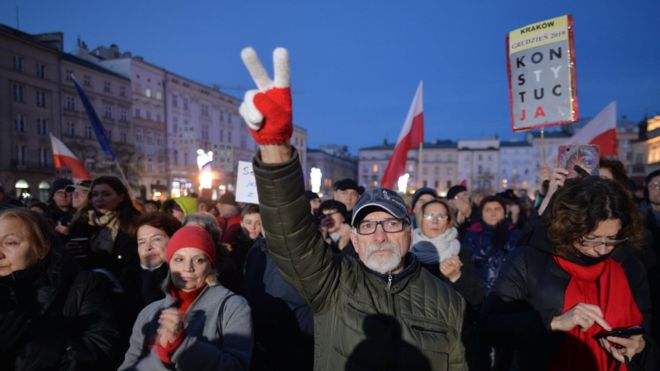 (FASTNEWS | COLOMBO) – Thousands of people have protested in cities and towns across Poland to show solidarity with judges who they say are facing increasing intimidation.

They demanded the reinstatement of one judge who was suspended for questioning the appointment of another judge by Poland’s president.

The governing Law and Justice Party has implemented widespread changes to the country’s judiciary.

The European Commission has already criticised the changes.

However the government claims the changes are needed to tackle corruption and overhaul its judicial system, which is says is still haunted by the communist era.

It also said that politicians take part in the selection of judges not just in Poland but in other EU countries. 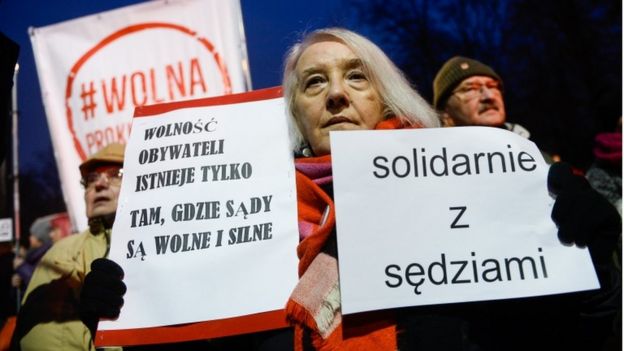 According to organisers, protests were held in more than 100 locations and attendees included lawyers and judges.

The largest protest was outside the Justice Ministry in Warsaw.

Many were pictured carrying EU flags and held signs that read “Solidarity with Judges”.

Judge Pawel Juszczyszyn was suspended from his post last week. He questioned the nomination of a judge because he had been appointed by the newly politicised National Council of the Judiciary, the authority that nominates judges in Poland.

Mr Juszczyszyn appeared at the protest in Warsaw and told the crowd: “I call on my fellow judges: don’t let yourselves be intimidated, do be independent and brave.”

Judges’ groups say the Law and Justice Party is unfairly disciplining judges that oppose changes to the judiciary.

The European Union has accused the government of threatening to undermine principals including the rule of law and judicial independence.