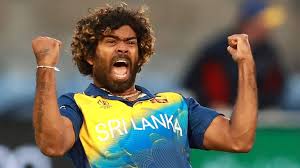 (FASTNEWS | COLOMBO) – Lasith Malinga said Sunday he was ready to stand down as Sri Lanka’s Twenty20 skipper after the team’s humiliating 2-0 loss to India in their latest foreign tour.

Returning from the series, the 36-year-old told reporters that Sri Lanka was just not good enough to make an impact in the 20- over game.

He said Sri Lankan bowlers weren’t able to restrict opponents while the batsmen were incapable of putting up the 170 runs needed for a fighting chance in a match.

“We don’t have that,” Malinga said, adding that it was unfair to expect a winning performance from the team given they were ranked just ninth in the world when returned to the captaincy just over a year ago.

But he added that he was “ready to accept” his responsibility for the team’s performance.

Malinga led Sri Lanka to the T20 World Cup title in 2014 and remained in charge until early 2016. His return to the top job in December 2018 was a surprise as he had lost his spot in the team after recurring injuries forced him to sit out several tournaments.

I DIDN’T DO ANYTHING FOR THE TEAM – MALINGA

Malinga rued his failure to contribute after his side went down to India by 78 runs in the 3rd T20I played in Pune.

Malinga’s woes against India came to the fore once again, as he went wicketless and conceded 81 runs combined in the two completed games in the series. The leading wicket-taker in the format now averages 72.50 and has an economy of 8.70 against India.

On Friday, the skipper again failed to make an impact and conceded 15 runs in the penultimate over, allowing Virat Kohli’s men to get past 200 despite a fine effort from spinners Lakshan Sandakan and Wanindu Hasaranga in the middle overs. Malinga praised with the efforts of the spin duo, but regretted his personal failure in the series loss.

“We lost 2-0. I have to perform well because I have experience playing T20 cricket, but I didn’t get a single wicket in this tournament. That is why we are in this situation… 65-70 per cent,” said the veteran.

Going forward, I am looking forward to get my job done. I can’t give an excuse to others (on non-performance) as I have wicket-taking variations, skills. I have the experience in franchise cricket but at the end of the day, in this tournament, I did not do anything for the team.

“We have got a plus point, that is Dhananjaya and [Lakshan] Sandakan and [Wanindu] Hasaranga bowled well in these conditions and against this kind of batting line-up.”

The first match in Guwahati was abandoned after rain, but India won the second by India by seven wickets and the third. (DN)