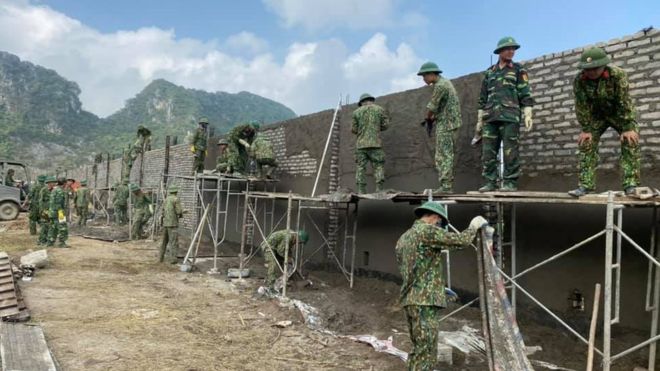 (FASTNEWS | HANOI) –  Three Vietnamese policemen who died during clashes over a land rights dispute have been buried with honours in Hanoi.

Their deaths came during a massive security operation last week in a village near the capital, in which a local leader also died.

Villagers had been resisting attempts by the military to build an airfield on their land for several years.

Land disputes are common in Vietnam, but rarely escalate into such conflict.

The raid and the unexplained death of the popular local leader, 84-year-old Le Dinh Kinh, have caused huge public controversy.

The government has blamed the officers’ deaths on “rioters”, but locals say police used excessive force.

What is the dispute in Dong Tam?

The military began building an airport at Mieu Mon, close to Dong Tam, about three years ago.

Local people say that in the process, about 50 hectares (124 acres) of their land was unfairly taken over and handed to Viettel Group, Vietnam’s military-run communications company.

All land in communist Vietnam is owned by the state, so the government can technically use what it wants for military or civilian purposes. But locals say they have farmed the land for generations and were not being properly compensated.

Dong Tam first hit national headlines in 2017, when four people were arrested for “disturbing public order” in protests against the acquisition of the land.

Villagers retaliated by holding 38 officials, including police officers, inside a community house, for about a week. They were eventually released after the authorities agreed some concessions.

What happened in the 9 January clashes?

Villagers told BBC News Vietnamese that early that morning, up to 3,000 security personnel turned up.

In a statement, the Ministry of Public Security said police had been sent to protect the public from protesters and to help the army build the boundary wall, a couple of kilometres away.

Construction of the wall annexing disputed land to the airfield was due to reach the edge of Dong Tam rural commune that day.

How did the four people die?

Le Dinh Kinh was a Communist Party member and retired local official. But in recent years he had become an unlikely opponent of the government.

He was leading a group of local people who had sworn to sacrifice their lives to defend the land. He had been detained – and allegedly beaten by police – during the 2017 clashes. (BBC)