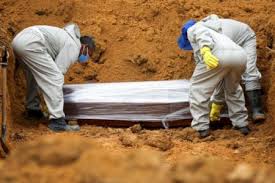 (FASTNEWS | COLOMBO) – More than 300,000 people around the world have now died globally from the coronavirus, according to figures from Johns Hopkins University, as the pandemic passed yet another bleak milestone on Thursday.

More than 4.4 million cases have also been recorded, according to the university’s count. Given the varied ways in which different countries report Covid-19 figures and the vast societal impact of the pandemic, the true number of infections and fatalities could be far higher.

The towering death toll nonetheless captures a world slowed to a standstill by the virus, with governments just beginning to creep out of crippling lockdowns and powerhouses like the United States and the United Kingdom still struggling to get a handle on their outbreaks.

It comes as a World Health Organization official warned that the virus “may never go away.”

Meanwhile, even nations that appear to have overcome the worst of their crises, such as China and South Korea, are finding that returning to normality is a lengthy and uncertain process.

More than a quarter of the global deaths — more than 84,000 — have occurred in the United States, where fatalities soared throughout April and continue to climb at a rate of around 1,500 a day. For weeks, the country has suffered more cumulative deaths than any other.

But most US states have nonetheless made plans to begin a phased reopening, with nearly every state relaxing some restrictions by this week.

That juxtaposition is worrying some experts; a projection model cited by the White House now forecasts 147,000 deaths in the US by August, citing the easing of lockdown measures.

A number of Latin American countries have also reported rapid spikes in infections and deaths in recent days.

Brazil, whose President Jair Bolsonaro has repeatedly dismissed the virus’ threat, is seeing cases skyrocket and has recorded more than 13,000 deaths. Mexico has meanwhile suffered more than 4,000 fatalities, with significant outbreaks also seen in Ecuador and Peru.

In Europe, which had been battered by the virus shortly before the Americas, some countries are starting to announce more positive steps. Former hotspots Spain and Italy are cautiously moving towards re-opening some businesses and are consistently reporting daily deaths in the hundreds — far lower than in March and early April.

But the outlook is more dire in the United Kingdom, which has seen the most deadly outbreak on the continent, according to official figures.

Prime Minister Boris Johnson announced rough plans to reopen the country on Sunday, but his road map was criticized for causing confusion, and the death toll in the UK has continued to climb by several hundred people a day.

His government has meanwhile struggled to ramp up testing, frequently missing the target of 100,000 tests per day it had promised to reach by the end of April.

In Germany, which has avoided the suffering seen in many of its neighbors, the focus is firmly on reopening society. But as with Asian nations that dealt with their outbreaks earlier, that too is proving difficult.

China is re-introducing restrictions after two cities reported new cases of the virus, including a lockdown in Shulan, near the Russian border — an ominous move that comes months after Wuhan became the first location in the world to shut in response to the virus.

And in South Korea, a new cluster of cases emerged in the country’s capital Seoul. That development sparked fears of a second wave in the country, and prompted President Moon Jae-in to issue a warning that echoes worldwide: “It’s not over until it’s over.”