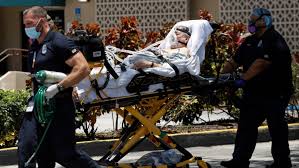 (FASTNEWS | COLOMBO) – The United States on Wednesday surpassed 150,000 recorded Covid-19 deaths — a milestone that comes as the country’s number of daily coronavirus deaths is the highest it’s been since the spring.

The country’s coronavirus death toll was 150,676 as of Wednesday evening — more than a fifth of the world’s recorded deaths, according to Johns Hopkins University.

“I think the fact that we as a country have not been able to get our arms around this, have not prioritized preventing those deaths is all that much more maddening. And so, for me it’s frustration, it’s sadness. And a resolve to try to figure out how we prevent the next 150,000,” Dr. Ashish Jha, director of the Harvard Global Health Institute, told CNN’s Wolf Blitzer.

“I think we can, but we’re really going to have to work for it,” he added.

Some states are seeing their highest death tolls. California on Wednesday reported 197 Covid-related deaths in a single day, according to state Department of Public Health. That total far outpaces the previous high of 159, recorded just last week.

Nationwide, the seven-day moving average of daily deaths rose above 1,000 on Tuesday — the first time since June 2.

And in 29 states, average number of daily deaths was at least 10% higher over the previous week, according to Johns Hopkins data.

Disease trends in the US are mixed: Deaths are increasing and hospitalizations are at or near peak levels, though new, daily reported infections are declining slightly.

But health experts have warned the death rate likely would rise as it is now, as a lagging consequence of a large spike in cases weeks earlier especially in the South and West.

Infectious disease experts say the country is at a critical juncture, as debates about how and whether to reopen schools for in-person learning rumble on.

“It’s not going to spontaneously come down,” Fauci, director of the National Institute of Allergy and Infectious Diseases, said Tuesday in a call with several governors about the pandemic.

The United States needs to restart its response with policy actions at the federal, state and local levels to get control of the pandemic, scholars at the Johns Hopkins University Center for Health Security said in a report.

“Unlike many countries in the world, the United States is not currently on course to get control of this epidemic,” the report says. “It is time to reset.”

The report includes 10 recommendations that include universal mask mandates, federal leadership to improve testing and, in places where rates of transmission are worsening, stay-at-home orders.

The report says federal, state and local leaders should mandate non-medical mask use in public and limit large indoor gatherings.

States should stop high risk activities and settings in areas that have rising test positivity, but no signs of crisis in hospitals or rising deaths. In areas where the situation is worse, stay-at-home orders should be reinstated, the report says.

The report points to improved testing being vital. The US response to the epidemic will be severely constrained without a reliable and efficient testing system, the report says.

One of the things the authors suggest to combat this is having the federal government work with states and commercial labs to identify and overcome obstacles to getting quick test results.

Fauci told MSNBC he didn’t believe moving back to a complete shutdown is necessary.

“I think psychologically that would be really very difficult for people to accept,” he said. He advised that states and communities could “backtrack a little” in order to “regain your footing.” Then the next reopening should be done with more caution, he said.

A leading medical education association had a similar urgent warning, saying deaths in the United States could skyrocket “well into the multiple hundreds of thousands.”

The Association of American Medical Colleges made that statement as it released what it called a roadmap on how to contain the disease.

The AAMC’s warning said that “if the nation does not change its course — and soon — deaths in the United States could be well into the multiple hundreds of thousands.”

It did not say when this tally might be reached, or forecast the number more precisely.

It urges the Trump administration to invoke the Defense Production Act, or determine other means, to solve critical shortages in Covid-19 testing supplies and personal protective equipment; and to set targets for stockpiling supplies.

It also suggests ramping up Covid-19 testing capacity to more than 2 million a day and reducing the turnaround time for test results.

Other groups have released plans on how to end the pandemic over the past several months as states have employed a patchwork of approaches to try and mitigate the resurgent virus.

The AAMC says it represents all accredited medical schools in the United States and 17 in Canada, as well as 400 teaching hospitals.

The US Food and Drug Administration could issue emergency use authorization of a coronavirus vaccine in a matter of weeks, once a vaccine meets efficacy requirements, said the director of the FDA Center for Biologics Evaluation and Research, which approves vaccines.

“We stand ready for using emergency use authorization in an appropriate setting,” Dr. Peter Marks said during an online event called the Disease Control and Prevention Summit. An emergency authorization would greenlight a coronavirus vaccine for use on an expedited basis.

The increased attention the agency is giving to coronavirus vaccine trials should speed up the process of granting emergency use authorization to a vaccine that crosses an efficacy boundary in a clinical trial, Marks said.

Two makers of two potential vaccines started advanced trials this week in the United States.
President Donald Trump said that the US has dramatically ramped up production of materials needed for a vaccine, which might be approved “very, very soon.”

Marks was hopeful, but realistic, about vaccine development.

“There are aspirational timelines, and I think that’s actually wonderful here, that people have aspirations for moving forward as quickly as possible, but we all know that real life generally does not go as well as our aspirations,” Marks said.

Although some states continue to see surges and set records in the numbers of coronavirus cases and hospitalizations, Tuesday’s total of new cases across the nation stood at 61,660, slightly lower than at this point last week.

Kentucky, a state that is among the at least 41 to require masks, reported 532 new cases Tuesday and a 5.08% positivity rate, which has gone down for the first time in four days, Gov. Andy Beshear said.
“Again, too early to draw conclusions, but I hope I’ve said, I hope that this is us starting to see, because the time period is right, where the facial covering requirement is starting to kick in and help,” Beshear added.

In Florida, where daily new cases are declining, state officials reported a record in daily deaths for a second straight day. The state Wednesday reported 216 deaths, surpassing the previous high of 186 reported a day earlier.