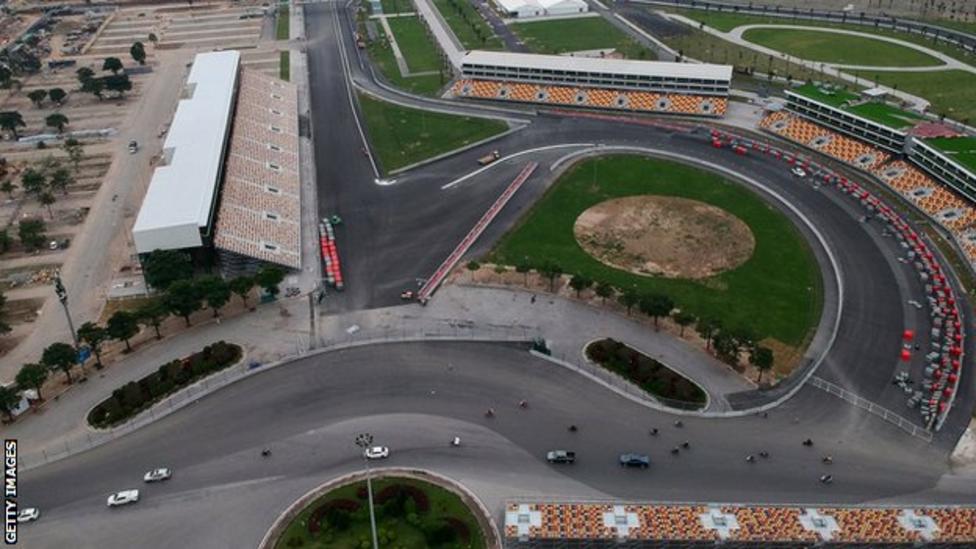 (FASTNEWS | COLOMBO) –  The Vietnamese Grand Prix has been dropped from the 2021 Formula 1 calendar, BBC Sport has learned.

It raises doubts that the race, due to make its debut in April before it was called off because of the coronavirus pandemic, will ever take place.

The date of the Vietnam race, 25 April, has been left blank on a 22-race 2021 schedule to be published on Tuesday.

The calendar could extend to 23 Grands Prix – a new record – if F1 can find a replacement for Vietnam.

The move has been triggered by the arrest on corruption charges of a key official responsible for the race in Hanoi.

The case is not related to his involvement in the grand prix.

However, Chung was the key figure in the race being introduced and championed it with the national government. His absence has led to a vacuum and Vietnamese authorities have told F1 that the government has other priorities, including key elections, the pandemic and recovery from a typhoon.

Talks are ongoing with regard to a possible race in Vietnam in 2022, but the situation raises the significant possibility that the event will fail to materialise.

Any replacement race would be at one of the tracks added to the calendar this year as a result of the pandemic, with Turkey, Italy’s Imola and Portugal’s Portimao the leading candidates.

A spokesperson for F1 said: “Our calendar will be announced on Tuesday and we are not going to give a running commentary before its publication. It also needs to go to the FIA World Motor Sport Council for approval.”

The 2021 season, the schedule for which has been seen by BBC Sport, is scheduled to start in Australia on 21 March and end in Abu Dhabi on 5 December.

The British Grand Prix at Silverstone is on 18 July and the new Saudi Arabian Grand Prix, announced last week, the penultimate race on 28 November.

One key development is that the calendar features a race in Brazil, and that it is scheduled to be in Sao Paulo rather than Rio De Janeiro. The event is listed as provisional for now.

The contract for Sao Paulo’s Interlagos track, which has hosted the event since 1990, ended this year, and F1 has agreed a deal for a race at a new circuit yet to be built in the Deodoro area of Rio.

However, the Rio track requires environmental approval as it involves the felling of a patch of forest.

This has not yet been granted and the project is clouded in controversy and confusion, with world champion Lewis Hamilton among those indicating their opposition to the track being built.

F1 is therefore planning to return to Sao Paulo – at least for 2021 and possibly for the foreseeable future.

F1 has political complications in returning to Interlagos, as the sport’s owner Liberty Media refuses to deal with the promoter at the circuit, who is close to former F1 boss Bernie Ecclestone.

The race is likely to go ahead with a new promoter.

Otherwise, the calendar bears a strong resemblance to the original 2020 schedule, which had to be restructured after the first 10 races were called off as a result of the pandemic.

The biggest change is the moving of the Dutch Grand Prix from the spring to 5 September, where it follows a week after the neighbouring Belgian event.

The race at the seaside town of Zandvoort had been due to return for the first time since 1985 this April, but was a casualty of the pandemic.

F1 is confident that it will be able to run its calendar next year, as long as the global pandemic does not significantly worsen.