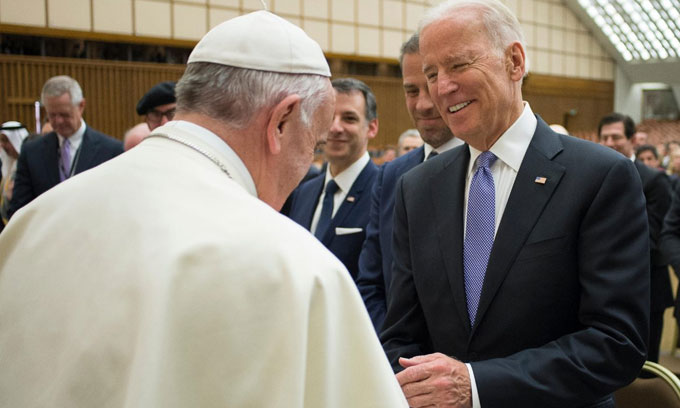 (FASTNEWS |  US) –  President-elect Joe Biden, the second Catholic elected president of the United States, spoke this morning with Pope Francis, the latest world leader to congratulate Mr. Biden even as his opponent refuses to concede the election.

According to a statement from Mr. Biden’s transition team, the former vice president thanked the pope for his “leadership in promoting peace, reconciliation, and the common bonds of humanity around the world.” Mr. Biden also said he hopes to work with the Vatican “on issues such as caring for the marginalized and the poor, addressing the crisis of climate change, and welcoming and integrating immigrants and refugees into our communities.”

Mr. Biden said he hoped the United States and the Holy See might find common ground and be able to “work together on the basis of a shared belief in the dignity and equality of all humankind.”

Pope Francis met Mr. Biden in 2013, when the then-vice president led a delegation from the United States at the pope’s installation. Writing about that experience for Time magazine in 2015, Mr. Biden recalled, “When it was my turn to greet Pope Francis, he reached out his hand and embraced mine. Then he said warmly, ‘Mr. Vice President, you’re always welcome here.’ That’s the message Pope Francis is sending to the world. He’s put a welcome sign on the front door of the Church.”

President Obama and Mr. Biden welcomed Pope Francis to the White House in 2015 and then Mr. Biden traveled to the other two papal stops on that trip, Philadelphia and New York. During the 2020 presidential campaign, television ads featured images from Mr. Biden’s two meetings with Pope Francis.

Many other Catholic leaders have also congratulated the president-elect, though a handful U.S. bishops have used unusually harsh language to condemn Mr. Biden because of his support for abortion rights.