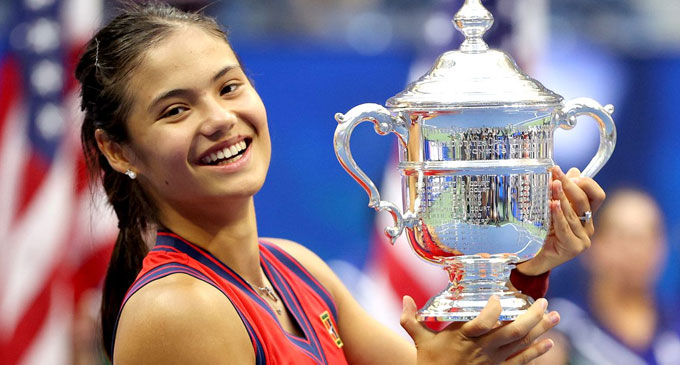 US Open champion celebrated in China for her heritage

(FASTNEWS |   CHINA) – Social media users in China are celebrating British tennis star Emma Raducanu – not just for her historic US Open win, but her Chinese heritage.

Raducanu was born in Canada to a Romanian father and Chinese mother, before moving to London aged two.

Many on Chinese site Weibo praised the 18-year-old, calling her a “Dongbei girl” – a reference to her mother’s ancestral home.

A video of her thanking her fans in Mandarin also went viral.

Raducanu has previously spoken openly about her mixed heritage in previous interviews, something Chinese netizens have taken pride in.

“She said she visits China regularly, and that one of her idols is Li Na. I’m so moved,” a Weibo user wrote, referencing a celebrated former Chinese tennis player.

Others likened her in looks to a Taiwanese pop star. “We must support the Rainie Yang of the tennis court,” another person said.

But some users chose to keep some distance: “She’s British – why are all of you now trying to claim her as your own?”

In interviews, Raducanu has paid tribute to her mum and that side of the family.

“They are so mentally resilient – it’s like nothing can bring them down. I would say I take a big part of my inspiration from her. My mum has worked very hard,” she said, adding that she learned about discipline and respect for other people from her.

The teenager, who visits her mother’s ancestral home of Shenyang during the holidays, has also said that she loves nothing more than binge-watching Taiwanese television shows.

On Saturday, Raducanu beat Canadian teen Leylah Fernandez in straight-sets at the US Open to become the first British woman in 44 years to win a Grand Slam final.