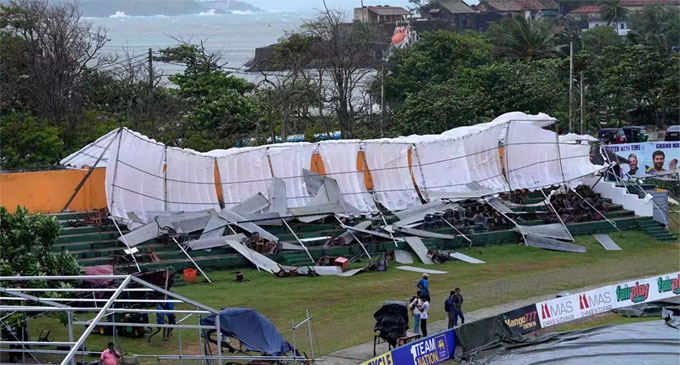 (FASTNEWS | COLOMBO) – The roof on a makeshift grandstand at Galle International Stadium has collapsed due to heavy rain, delaying the start of second day’s play between Sri Lanka and Australia.

No spectators were in the stand at the time, with Australia’s team only just arriving at the ground.

Rain began falling around before the scheduled first ball on day two of the first Test, with gusts blowing in off the coastline.

According to a report, ground staff managed to keep the entire ground covered as the rain blew in sideways, but metal sheets secured by ropes covering the small concreted seating area on the eastern side of the ground blew off.

The entire roof then buckled, with officials now considering how to secure the metal before play can begin.

Rain also continued to fall past the scheduled start of play of 10am local time, with ground staff struggling to keep the entire outfield covered amid the gusts of wind.

Tyres are used to keep some sections of tarpaulin down on the ground, however other pieces covering the outfield have blown away.

Veteran off-spinner Nathan Lyon’s with his brilliant fifer led Australia’s dominance over Sri Lanka on the opening day of the first Test of the two-match series, at Galle International Stadium, here on Wednesday.

A total of 13 wickets fell on day one as Australia, led by Lyon’s five-for, bowled Sri Lanka out for 212 in their first innings before reaching 98/3 at stumps and trailing by 114 runs.