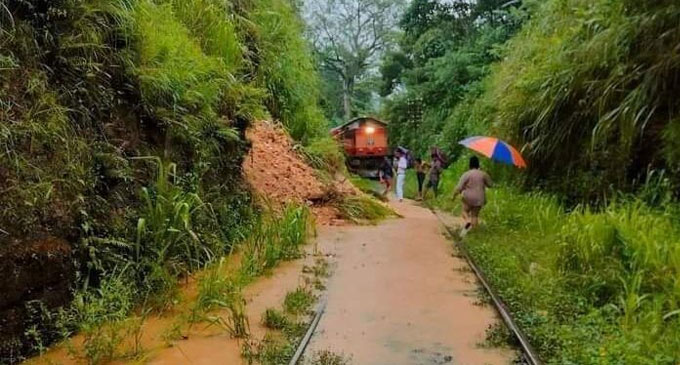 (FASTNEWS | COLOMBO) – Several trains have been cancelled today (3) as well owing to earth slips along the Upcountry Railway line due to the incessant rain experienced in the Central Province.

Meanwhile, the Department of Meteorology says the showery and windy conditions are expected to continue in the western and southern sea areas and in the southwest quarter of the island due to active Southwest Monsoon.

The Met Department predicts showers or thundershowers in the Western, Sabaragamuwa, Central, and North-Western provinces and in the Galle and Matara districts.

Heavy rain falls about 100 mm can be expected at some places in the Sabaragamuwa province and in the Kandy, Nuwara-Eliya, Galle and Matara districts.

It added, several spells of showers may occur in the Northern and North -Central provinces as well.

Meanwhile, strong winds about 50 kmph can be expected at times along the western slopes of the Central hills and in the North-central, Western, North-western and Southern provinces.