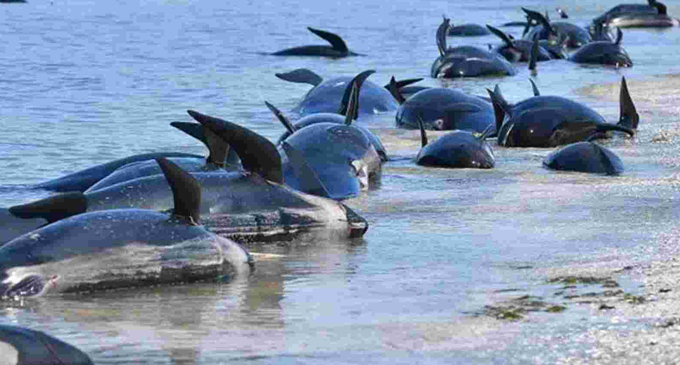 (FASTNEWS | AUSTRALIA) – In unfortunate news, a pod of 230 pilot whales was found washed up in Macquarie Harbor in the Australian state of Tasmania today, Sept. 21. This comes two years to the day after a similar stranding in the same area of 470 whales. According to the Department of Natural Resources and Environment Tasmania, environmental experts are currently on their way to the harbor to investigate the scene.

Specifically, the pilot whales are stranded on Ocean Beach and half of the pod is reportedly still alive. The Marine Conservation Program will be on-site to administer live-saving techniques and equipment. They are hoping to save the whales that are still alive. The team is working with the Tasmania Parks and Wildlife Service and Tasmanian Police.

David Midson, general manager of the West Coast Council–which is the local government covering mostly western Tasmania–urged residents to stay away from the area.

“The most important thing, if you’re not invited by parks or one of the organizations helping is to stay away,” Midson told the Australian Broadcasting Corporation. “Having extra people can really hinder how they go about their rescue efforts.”

The Department of Natural Resources and Environment Tasmania released a statement regarding the coincidental nature of this stranding. “The department has a comprehensive Cetacean Incident Manual which has undergone extensive review since the 2020 mass stranding and which guides a stranding response,” the statement reads. The department clarified that “stranding response in this area is complex.” If teams require help from the public once the scene is fully investigated, they will reach out through appropriate channels. They added, “Whales are a protected species, even once deceased, and it is an offense to interfere with a carcass.”