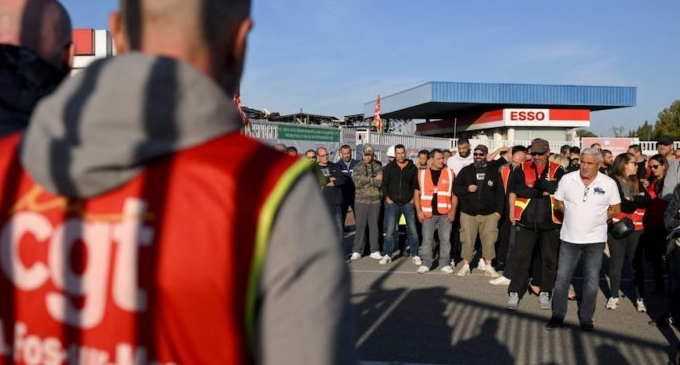 (FASTNEWS |  FRENCH) – Striking French oil workers have voted to continue their industrial action, which has led to shortages at fuel stations across the country.

They responded angrily after the government said it would use mandatory powers to force some of them to go back to work.

The strike, in its third week, has shut six of France’s seven oil refineries.

With long queues of cars now a regular sight at the pumps, the government wants to get the fuel flowing again.

Nearly a third of French petrol stations are now reported to be running short of at least one kind of motor fuel.

Unions want pay increases for their workers, which they say should take account of the huge profits being made at the moment by the oil companies.

The government’s latest move to head off the impact of the action is to requisition key staff at a refinery in Normandy, threatening prosecution unless they allow some lorry tankers to fill up.

French Prime Minister Elisabeth Borne said that if no agreement could be reached between the oil firms and the unions, the government would act to “unblock the situation”.

But the hard-left unions behind the stoppages see this as a threat to their right to strike and have toughened their position, calling the government’s warning “illegal” and a “choice of violence”.

A spokesman for the CGT union said it was waiting for the government’s requisition notifications and would challenge them in court.

On Friday, French President Emmanuel Macron called on unions to end the strikes, but said energy companies should listen to the workers’ “legitimate salary demands”.

The strike action has split opinion in France, with some commuters expressing exasperation over the fuel shortages and pointing out that they need their cars for work.

But at a time of growing anxiety about the cost of living and soaring profits for some energy companies, others have expressed sympathy for the strikers.