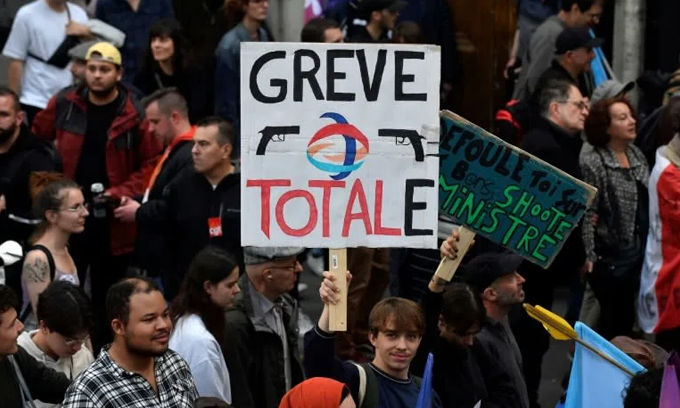 (FASTNEWS | FRENCH) – France’s prime minister warned striking oil industry workers Sunday that the government might once again use its requisition powers to force workers back to their posts to ease fuel shortages.

Elisabeth Borne told TF1 television that if the situation remained tense Monday, then the authorities would proceed with more requisitions like the ones enforced last week.

About 30 percent of service stations were experiencing supply problems for one type of fuel or another, she said. “That’s too many.”

She appealed to those TotalEnergeies workers still on strike not to “block the country with all the difficulties that that creates”.

After three weeks of industrial action, three out of seven of the country’s oil refineries and five major fuel depots (of around 200) are affected, the government said.

Geoffroy Roux de Bezieux, president of the Medef business lobby group, told Radio J that another week of fuel shortages might have a real impact on the economy.

“This isn’t a normal strike,” he added. “The right to strike has limits.”

Farmers are struggling to find the fuel they need to plant their winter crops on time, particularly in the north of the country.

– ‘General strike’ –
Borne’s warning came after tens of thousands marched through Paris Sunday to protest the rising cost of living, and government inaction over climate change.

The demonstration was called by the left-wing political opposition and led by Melenchon, head of the France Unbowed (LFI) party.