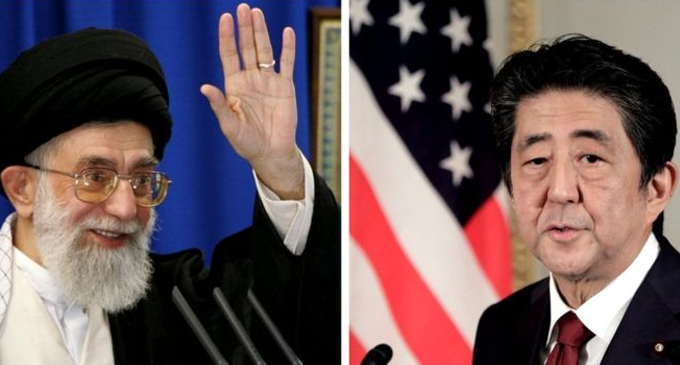 (UTV|COLOMBO) – Japanese Prime Minister Shinzo Abe is heading to Iran with a keen eye on international sanctions and domestic politics.

The visit, which begins Wednesday, is partly aimed at easing tensions between Washington and Tehran over Iran’s nuclear programme.

However, observers have expressed doubt over what can actually be achieved.

For Mr Abe, the trip might help boost his image as a global statesman ahead of elections back home, experts say.

Mr Abe will be the first Japanese prime minister to visit Iran in four decades, and is expected to hold talks both with Supreme Leader Ayatollah Ali Khamenei and President Hassan Rouhani.

Why is Abe going to Iran?

Officially, Japan and Iran are marking the 90th anniversary of their diplomatic relationship this year.

Much more significant is that the trip comes shortly after US President Donald Trump made a state visit to Japan.

And US relations with Iran have nosedived over Washington’s withdrawal from a 2015 nuclear deal over Iran’s nuclear programme.

Tensions escalated further when the US sent an aircraft carrier to the region, raising fears of an actual confrontation.

So there are hopes that Mr Abe might be able to engage in some shuttle diplomacy between the two sides, dialling down tensions and getting them to talk to each other.

Just one day before heading off, the Japanese prime minister spoke to Mr Trump on the phone and exchanged views on Iran, a spokesperson for Mr Abe told reporters on Tuesday.

Essentially, in 2015 Iran agreed to limit its nuclear programme in return for sanctions being lifted.

The deal was done under the Obama administration though, and Mr Trump withdrew from it last year.

The US reinstated unilateral sanctions while other signatories to the 2015 deal – like the EU, Russia and China – still hope to keep the agreement alive.

In retaliation for sanctions reinstated by the US, Iran last month announced it would suspend some commitments.

On Tuesday, the International Atomic Energy Agency (IAEA) said Iran was increasing its production of enriched uranium though it’s not clear when it will reach a limit set under the 2015 deal.

Why does it matter to Japan?

Tokyo has never been part of the Iran agreement but that does not mean it isn’t affected.

Japan used to import oil from Iran. Following fresh US sanctions it has bowed to Washington and stopped those imports.

“Japan supports the 2015 agreement and is unhappy that the US pulled the plug and thinks it’s a really big mistake,” explains Professor Jeff Kingston, director of Asian Studies at Tokyo’s Temple University.

“But it has no real say in the matter, so when US imposed sanctions it’s not surprising that Japan followed.”

While Tokyo can do without Iranian oil for now, any conflict in the Middle East would probably drive up oil prices and that would naturally affect Japan a lot.

What that means for the Middle East is that Tokyo is trying to talk to everybody, stay friends with everyone, to make sure it can still get oil.

Can Japan mediate between the US and Iran?

Observers doubt that Mr Abe has much leverage to make a difference.

“My take is that the chances of brokering a ‘deal’ between Iran and the USA are close to zero,” Professor Robert Dujarric, head of the Institute of Contemporary Asian Studies in Tokyo, told the BBC.

While unlike the West, Japan is free of historical or religious baggage when it comes to talking to Iran, “Mr Abe will still not be seen as an honest broker by Tehran,” explains Mr Kingston.

A good mediator would be someone seen as impartial by both sides, but Mr Abe and Mr Trump have just met in Japan and for long have prided themselves on their good friendship.