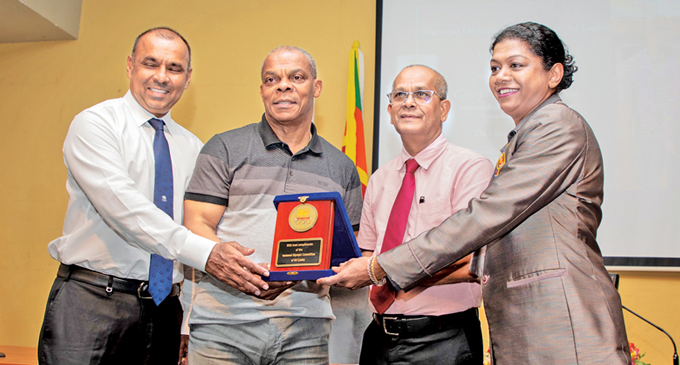 (FASTNEWS | COLOMBO) – Renowned American athletic coach Tonie Campbell, mentor of Sri Lanka’s Olympic silver medallist Susanthika Jayasinghe, has been roped in by the National Olympic Committee (NOC) to launch a high-performance programme for athletes and coaches in the country.

He delivered a lecture on ‘High-Performance’ to invited athletes at the NOC’s Hemasiri Fernando Auditorium and a ‘Motivational Talk’ to the National pool athletes and coaches at the Sports Ministry auditorium on Tuesday and was scheduled to inspect the three main athletic venues in Sri Lanka – Sugathadasa Stadium, Diyagama Stadium and the Sports Ministry Complex at Torrington Square – during his two-day visit.

“It is a special day for me personally because ever since I took over as Director of High-Performance at NOC, I have been thinking how we could lift the standard of athletics in Sri Lanka. It was then that I decided to contact my American coach who was willing to help me without any hesitation,” said Susanthika on whose invitation Campbell came to Sri Lanka from Doha, Qatar where he was attending the IAAF World Athletic Championships.

“I am really thankful to Susanthika for introducing us to Tonie who has come here on his own accord. He has not charged us and he is also going to work with us on a long-term basis. As he correctly pointed out, we have to have a short-term plan, a mid-term plan and a longer-term plan because without success at international level, it is difficult to implement any plan,” said Asanga Senevirate, NOC Vice-President and Chairman High-Performance Committee.

“Athletics has hit rock bottom. We must do something to lift our standards. We are not in competition with the Athletics Association or the Sports Ministry. We have not won an Olympic medal for two decades. With the appointment of Susanthika as Director of High-Performance and the arrival of Tonie Campbell, we see a better future for athletics in the country,” said Maxwell de Silva, NOC secretary general.

Susanthika had been discussing the possibilities of this program with Campbell for the past few years and thankfully he was in the right place at the right time.

“When I came to Sri Lanka three or four years ago, Susan asked would I help her. I said ‘sure I will help, you no problem.’ Finally she called me and said ‘OK I think we have something. Would you come’. I said ‘maybe when I am in Doha which is only four hours by flight’. She said ‘okay you must come’. Then I got a call from this gentleman (Asanga) who also said ‘you must come’. So we reached an agreement I would come and help because I consider Susan as family to me,” Campbell said at a press conference on Tuesday.

“We worked very well together and more than a coach-athlete relationship, we have a family relationship. And I thought that if she was going to do something to help the country, then I would be here to help her realise the dream of hers to make Sri Lanka an athletic power,” said Campbell on teaming up again with his protégé.

“Firstly thank you to Susanthika Jayasinghe and the NOC here, that made it possible with a nice invitation to come here today. We are looking forward to working through Susan. I would be her advisor and setting up this training high performance programme. My function would be working with Susan to help discover young athletes that are in this country, that have been neglected in the past and to help the coaches to set up coaching seminars and coaching clinics to make coaches better,” said Campbell who worked with athletes of the calibre of Michael Johnson, Maurice Green, Otis Harris, Tanya Lawrence, Allen Johnson, Felix Sanchez, Calvin Smith Sr and Dennis Mitchell apart from Sydney 2000 medallist Jayasinghe, during his illustrious coaching career.

Campbell stressed the importance of educating coaches and felt there was no need to bring down foreign coaches here.

“I really believe that we can develop Sri Lankan coaches. Instead of bringing coaches from around the world, why don’t we make coaches here better. I think this is the way of the future because if you keep bringing in coaches from different parts of the world, they don’t have the same ideology, mentality as the young man or young woman in Sri Lanka. So to be better able to convey what you want, it is better to train Sri Lankan men and women to coach Sri Lankan athletes. This is my belief and I think we can do that,” said Campbell

“It all begins with the coach. The coach must be able to go into the different villages and find talent to bring them to Colombo to help develop them. We will be making sure that coaches get properly educated through this programme through coaching seminars, coaching clinics, so they can help the athletes to become better athletes. I think at the end of the day this is what it is all about,” he said.

“It is going to take some time to develop the coaches. So in the meantime we will be working together, Susan and I for immediate goals to try to get some people ready for next year. I think the Sports Minister want to see results. We are going to be result-oriented. We are going to find this talent. We are going to work hard to see if next year in Tokyo, we can have one Sri Lankan athlete make a final in something. I think the Sports Ministry and NOC would really like to see one young man or woman raise the flag in the final of some event at the Olympic Games. This is our goal, this is our mission,” he declared.

Campbell was confident Sri Lanka could find another Susanthika Jayasinghe.

“I think it’s a shame that we cannot find one man or woman in this country that even approached the talent of Susanthika. I am sure there is one out there. Our job is to find him or her and bring them here, to make this country proud again. I am sure we can do that. That’s our mission,” said Campbell.