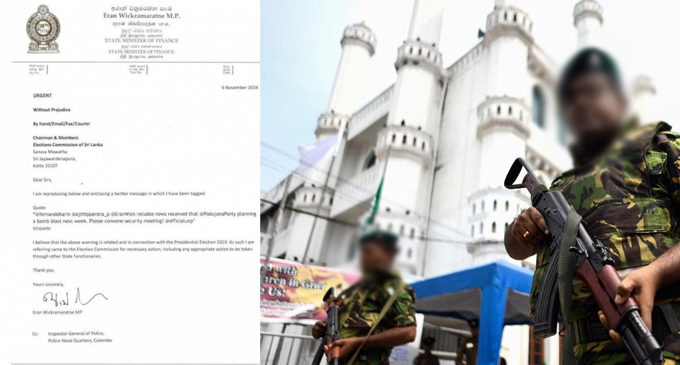 (FASTNEWS | COLOMBO) – State Minister of Finance Eran Wickramaratne has lodged a complaint with the Election Commission and the Acting Inspector General of Police (IGP) C. D. Wickramaratne with regard to a twitter message warning of a bomb attack, planned with the knowledge of a leading political party.

In a tweet, Wickramaratne said he wrote to the Chairman of the Election Commission Mahinda Deshapriya, the Opposition and the IGP on the message he received indicating that a bomb blast had been planned by a certain group with the knowledge of Sri Lanka Podujana Peramuna (SLPP).

An official complaint has been lodged with the elections commissioner and IGP. #lka #srilanka pic.twitter.com/Elkvsa7oRN