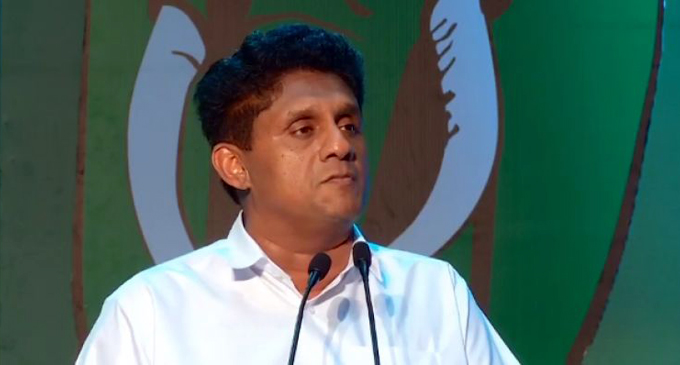 (FASTNEWS | COLOMBO) – People of the North & East have been made use of only for political purposes. We will provide the people with all what is required for their daily livelihood, said New Democratic Front (NDF) Presidential candidate Sajith Premadasa.

Minister Premadasa was speaking at a meeting presided over by Paddiruppu Electorate UNP Organizer S. Ganeshamoorthy at the Kaluthavalai Playground in Batticaloa on Saturday (09).

He further said that up to now there has been no International Aid Conferences held in the North and in the East. In this united country, we shall build a nation without any racial or religious bias. We shall build this country so that all communities will live under one umbrella. We will eliminate religious and racial discrimination and build a united Sri Lanka.

“The Mandoor- Kurumanveli Bridge will be built. Making Poraitivu Pattu as the base, we shall construct support hospitals with a network of rural hospitals. The health sector and the quantity of healthy communities will be improved. By developing the Thumbalai River and constructing irrigation work we shall support agricultural activities in the Eastern Province. Assistance will be provided to small, medium and large scale industries. Loan facilities up to Rs.300,000 will be given to the three-wheel drivers. In addition, to implementing the Samurdhi programme, we will follow the Janasaviya programme of Ranasinghe Premadasa. Through this we can eliminate poverty from the country,” Premadasa added.