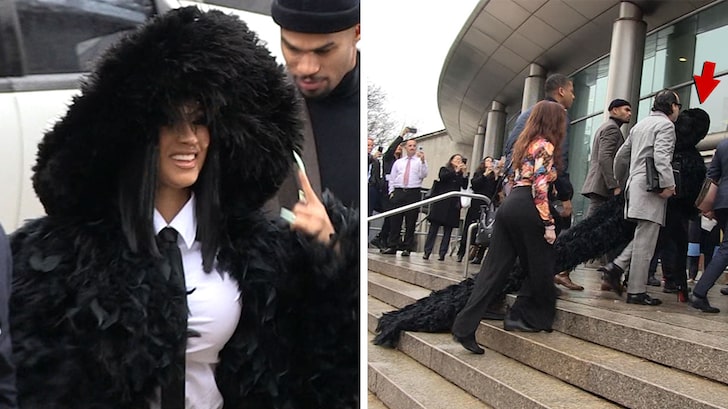 (FASTNEWS | COLOMBO) – American rapper Cardi B let her fashion do all the talking when she made a dramatic entrance at the Queens Criminal Court on Tuesday afternoon (local time).

The 27-year-old star was seen sporting a larger than life coat full of feathers with a towering hood. Cardy kept the rest of her ensemble simple. She paired her outerwear with tailored white button-down, black pants, a matching tie, and pumps, reported E!Online.

Instead of wearing her usual colourful makeup, the rapper was seen in a no make-up look.

Kern stated that Judge Zayas had adjourned the case until January 17 to conduct pre-trial hearings relating to the other parties. The judge excused the rapper from coming to court as the hearings don’t involve her.

The superstar’s court appearance is most likely regarding her alleged altercation at a strip club in Queens last year. Just a few months ago, the Grammy winner was indicted for attempted assault in the second degree, however, she pleaded not guilty.

Defense attorney Nicholas Ramcharitar, captured video of the ‘I like it’ rapper while she was entering the building, He stated that Cardi was not upset at all the cameras and seemed quite eager to get in and out of the building as quickly as possible. (NK)