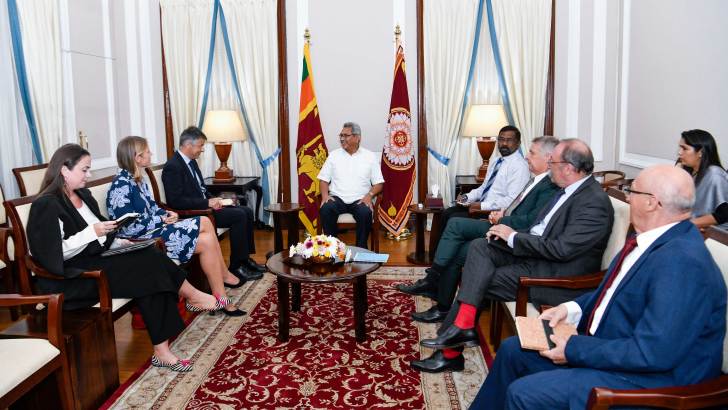 (FASTNEWS | COLOMBO) – President invited all countries to look positively at Sri Lanka as an investment hub when a delegation representing the European Union (EU) called on President Gotabaya Rajapaksa at the Presidential Secretariat Monday (06).

Underlying Sri Lanka’s neutrality stance, President pointed out that the best way to overcome regional hegemony would be to assist small countries such as Sri Lanka to develop and move forward at the same pace as the developed countries.

Congratulating the President on being elected to the Office on behalf of his and the delegation Mr.  Chaibi spoke positively of a well-organized presidential campaign and the well-delivered speech by the President during the swearing in ceremony.

The envoys were interested to know more about development versus devolution. President Rajapaksa stated that political solutions must go hand in hand with economic development for the benefit of the people. Taking the 13th Amendment as an example, he noted that certain areas cannot be accommodated. Instead politicians must look at alternate solutions. For instance, if police powers were handed over to the Provincial Councils, it would simply lead to politicization of police work.

President Rajapaksa noted weather was a main challenge affecting Sri Lanka’s agriculture. Therefore Sri Lanka needs to explore how methods such as greenhouse can help. He also noted the need for Sri Lanka to move from chemical to organic fertilizer. This will attract different markets. Also, he emphasized the need to make such a transformation as chemical fertilizers and pesticides are a major cause for cancer as well as a pollutant of our waterways.