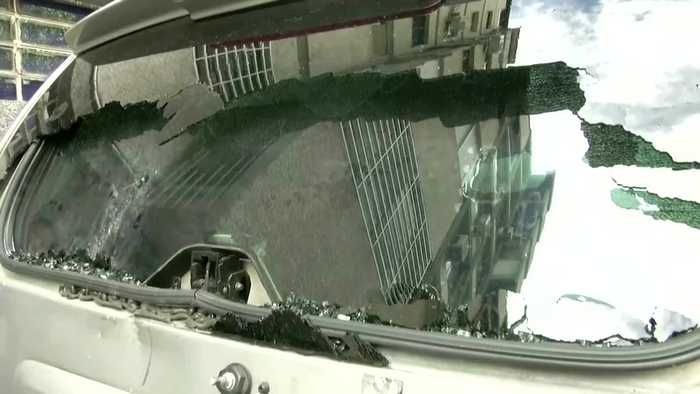 (FASTNEWS | Caracas) – Pro-government groups in Venezuela have attacked a convoy of opposition lawmakers outside the parliament building in central Caracas.

Opposition leader Juan Guaidó said the violence had forced him to transfer a planned meeting to a building on the outskirts of the city.

Video footage from inside one car showed supporters of President Nicolás Maduro throwing a traffic cone and a stone that broke one of the windows.

During his state of the nation address on Tuesday, Mr Maduro accused Mr Guaidó – the Speaker of the National Assembly, of helping the US to wage an economic war on Venezuela.

The attack on the convoy comes eight days after Mr Guaidó and 100 fellow opposition lawmakers pushed past police to enter the National Assembly.

It is the latest escalation in Venezuela’s political crisis.

A group of opposition members of the National Assembly were being driven to the legislative palace in the centre of the capital, Caracas, when their cars were set upon by a group of government supporters.

Footage published on the National Assembly Twitter account shows a man shattering the rear window of one of the cars with a traffic cone.

Opposition politician Angelo Palmeri said the cars were also hit with metal bars and bats, and his colleague Delsa Solórzano said the pro-government “mob” had opened fire on the car she was in. 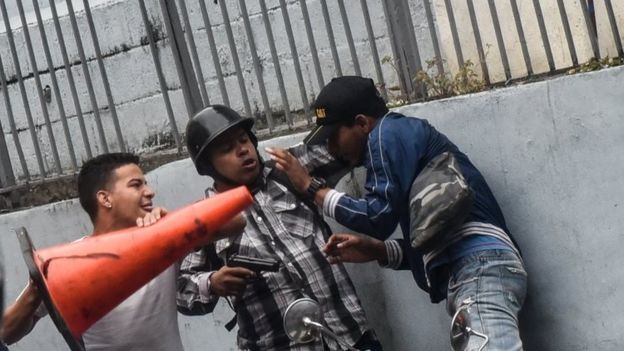 “This was done while the National Guard watched complacently,” Mr Palmeri said. He added that he thought a trap had been set for him and his fellow lawmakers.

“I was surprised to find that the National Guard waved us through several checkpoints, then we were surrounded by this mob and I understood why we’d been let through,” he said.

The National Assembly is one of the few remaining institutions in Venezuela which is not controlled by the governing PSUV party.

On 23 January 2019, Mr Guaidó, declared himself acting president of Venezuela, arguing that the election which returned Mr Maduro to power in 2018 had been fraudulent.

Mr Guaidó and his supporters claimed that the presidency was therefore vacant and invoked an article in the constitution which calls for the Speaker to step in as president.

Mr Guaidó declared himself acting president and was quickly recognised as Venezuela’s legitimate leader by more than 50 countries, including the US, the UK and many Latin American nations.

Since then, Mr Guaidó and Mr Maduro have been at loggerheads but the latter has maintained a firm grip on the government thanks to the support of the armed forces.

Earlier this month Mr Guaidó, who was facing an end to his term as Speaker on 5 January, went to the National Assembly to stand for re-election but was denied entry by the National Guard.

They pushed him back with shields as he tried to clamber over the railings surrounding the building.

Mr Guaidó moved the session to another location where about 100 lawmakers re-elected him as Speaker.

Two days later, he and the lawmakers loyal to him managed to gain entry to the National Assembly building by pushing through the National Guard security cordon, and Mr Guaidó was sworn in as Speaker and also renewed his oath as acting president.

President Maduro in the meantime has recognised a dissident lawmaker, Luis Parra, as Speaker.

What does it all mean?

The scenes on 5 January, when Mr Guaidó was prevented from entering the National Assembly, were widely seen as showing the lack of power the opposition leader has over the National Guard.

However his success in getting into the building two days later has been hailed as a success for the opposition.