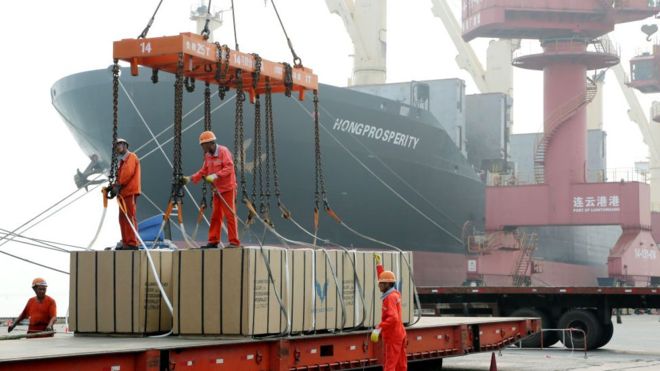 Official figures show that the world’s second largest economy expanded by 6.1% in 2019 from the year before – the worst figure in 29 years.

The country has faced weak domestic demand and the impact of the bitter trade war with the US.

The government has been rolling out measures over the past two years in an attempt to boost growth.

It comes after almost two years of trade tensions with the US – although hopes of a better relationship with America have seen improvements in manufacturing and business confidence data.

This week Washington and Beijing signed a “phase one” trade deal. However, analysts remain unsure whether those recent gains will continue.

In response to the lower growth rate, Beijing is now widely expected to roll out yet more stimulus measures.

The government has used a combination of measures aimed at easing the slowdown, including tax cuts and allowing local governments to sell large amounts of bonds to fund their infrastructure programmes.

The country’s banks have also been encouraged to lend more, especially to small firms. New loans in the local currency hit a record high of $2.44 trillion (£1.86tn) last year.

So far the economy has been slow to pick up, with investment growth falling to record low levels.

Historically, China has seen much stronger economic expansion, with the first decade of the 21st Century seeing double-digit percentage growth.

But – although that 6.1% growth rate is China’s weakest expansion in almost three decades – it is much higher than other leading economies.

The US central bank, for example, has forecast that the American economy will grow by around 2.2% this year. (Courtesy – BBC)