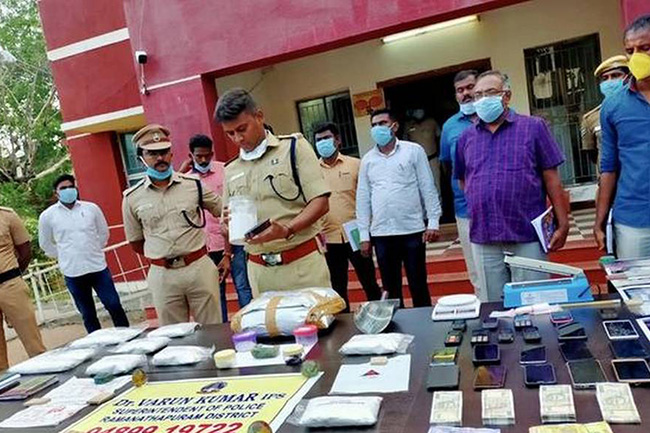 (FASTNEWS | COLOMBO) – A consignment of drugs procured from several States and moved close to the shoreline in Ramanathapuram district, for smuggling to Sri Lanka by boat, has been intercepted by the Indian police on Thursday.

The suspects used the COVID-19 pass to cross police barricades and reach a common point near Tiruvadanai to deliver the sample contraband substances to an agent. They had applied for an emergency pass, stating that a close relative had passed away.

The seizures include various quantities of methamphetamine, opium paste, heroin, MDMA (Ecstasy), amphetamine and methaqualone, worth about ₹10 crore in the international market. There is a huge demand for them due to the lockdown caused by pandemic.

Acting on a tip-off that came two months ago, Ramanathapuram, Superintendent of Police Varun Kumar formed a special team to keep tabs on the activities of some suspects. The information was that high-quality drugs were procured from agents in different States who had contacts with suppliers in Afghanistan.

“The quantity of the drugs seized varies between three tablets and 6.8 kg. The kingpin of the racket is Aruldoss of Sivaganga district who engaged Ajmeer Khan of Thondi in Ramanathapuram, who owns a boat, for smuggling the drugs to Sri Lanka. These were basically samples for quality testing in Sri Lanka…a bigger consignment will follow,” Mr. Kumar told The Hindu.

He said that the seized substances were psychoactive drugs used in parties or by celebrities for various purposes. After the quality check, the samples were planned for trans-shipment to Australia, where there was a heavy demand owing to the lockdown.

“The prices are more than double in the international market now. We have reasons to believe that a bigger consignment, either sourced for Australia or made to specifications in clandestine laboratories, are ready in secret godowns. The investigating team is tracking some clues,” he said.

The police seized an autorickshaw, two motorcycles and a car used to commit the offence. Nine suspects, including Aruldoss and Ajmeer, were taken into custody. The boat, which the accused wanted to use for smuggling the drugs, will be attached under provisions of the Narcotics Drugs and Psychotropic Substances Act. As many as 30 mobile phones were seized and sent for forensic analysis, the sources added.