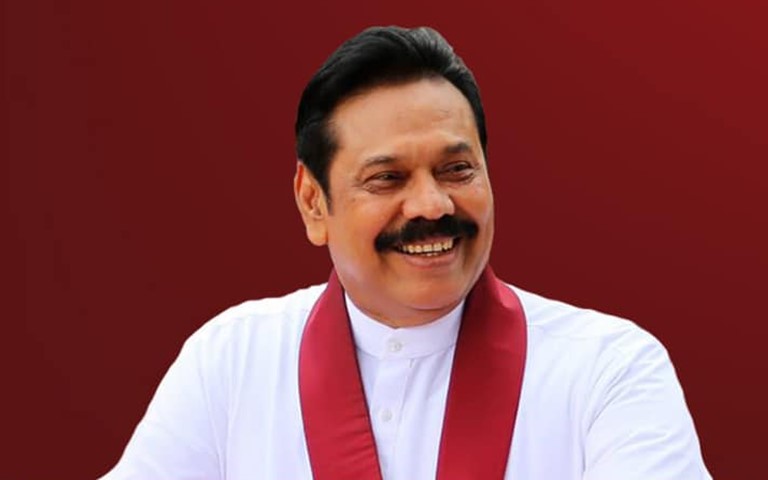 (FASTNEWS | COLOMBO) – While requesting the people of Sri Lanka to always have the broader picture in mind when it comes to politics, Prime Minister Mahinda Rajapaksa has stressed the necessity of having a ‘very strong mandate’ at the forthcoming election in order to conclusively defeat domestic and foreign conspiracies against Sri Lanka.

“You will recall that at the end of 2018 when the yahapalana government began to break up, diplomats of certain Western embasies sat in the visitor’s gallery in Parliament and applauded and cheered the yahapalana Speaker’s efforts to protect their investment. We must bear in mind that even though the conspirators lost the presidential election, they have not given up their quest,” the Prime Minister said in a special statement.

Most venerable members of the Maha Sangha, Clergymen of all other faiths, people of Sri Lanka and friends,

A socialist government assumed power in this country in 1970, but nobody said that it had been brought into power through Russian or Chinese intervention. Likewise, a capitalist government assumed power in 1977, but we never said that it had been brought into power through American or British intervention. However there was foreign interference to an extent never before experienced in this country at the 2015 presidential election. Certain foreign parties began to intervene in the politics of this country in a major way after we won the war in 2009. They never thought we would be able to win that war. This intervention actually began at the 2010 presidential election but the people of this country conclusively defeated that early attempt. However the conspiracy continued till 2015. Everyone knows who prevailed on the leader of the UNP to stand aside in favour of a common candidate.

The situation that prevailed in this country following the assumption of power by the yahapalana government in 2015 was akin to having been taken over by a hostile foreign invading force. They systematically persecuted the nationalist political camp in this country. They jailed leading Buddhist monks on trumped up charges in order to intimidate the Maha Sangha which has always been at the forefront in protecting the sovereignty of this country. They went after the elephants and tuskers belonging to the temples in a major way, in order to put an end to the perahera traditions of the Buddhists.

They moved to demoralize and render ineffective our armed forces which defeated terrorism and ensured the territorial integrity of the country. Selected members of the armed forces ranging from the lowest ranks right up to the Chief of Defence Staff were arrested, kept in jail for weeks, months or years and cases were filed against them on trumped up charges. The intention behind all this was to create the impression in the minds of the local population and also to convey to the world the idea that these were not war heroes but thieves and murderers.

Nationalist politicians were also systematically persecuted. Various Commissions of Inquiry were instituted against them. They were hauled before the police, remanded for months and cases were filed against them on false charges. All this was done with the intention of completely destroying the nationalist camp in this country and thus facilitating the division of Sri Lanka by introducing a new constitution. What they could not achieve through war, they tried to achieve through political manoeuvres.

These plans could not be implemented in their entirety because we won the 2019 November presidential elections. However domestic and foreign conspirators have not yet given up. Everyone saw the drama that was orchestrated within days of the new President assuming office alleging that a local employee of a Western embassy had been abducted and questioned. That showed that these conspirators were not willing to give the new dispensation any breathing space.

The main pledges given by the yahapalana conspirators to their foreign masters were contained in resolution 30/1 which the yahapalana government co-sponsored in the UN Human Rights Council in October 2015. They admitted that the Sri Lankan armed forces had committed war crimes, and they pledged to establish a special court to try those war crimes with the participation of foreign judges and prosecutors. They also undertook to remove through administrative means, members of the armed forces who were suspected of having committed war crimes even in the absence of evidence against them which can be used in courts. The intent behind all this was to demoralise and render ineffective the armed forces of Sri Lanka.

Even though the yahapalana government was not able to implement these pledges in the manner originally intended, they have introduced new laws to implement them by other means. In August 2016, the Office of Missing Persons Act was rammed through Parliament without leaving room for any debate. Though it’s described as an ‘office’, this is actually an inquisitorial body that can issue summons, examine witnesses, and collect evidence. Officers of the OMP can search without a warrant any armed forces installation, police station, or prison and take into their possession any document or thing they deem necessary. All state bodies including the intelligence agencies and the armed forces are legally bound to cooperate with the OMP even in contravention of the provisions of the State Secrets Act.

In March 2018, the yahapalana government passed Act No: 5 of 2018 in order to make the provisions of the International Convention Against Enforced Disappearances applicable in Sri Lanka. The purpose of this was not to faciliatate the location of disappeared persons, but to persecute members of the armed forces. Under this law, a person suspected of being responsible for an enforced dissappearance in Sri Lanka can be extradited to a foreign country and either tried in that country or handed over to the International Criminal Court.

In August 2018 the yahapalana government passed an amendment to the Mutual Assistance in Criminal Matters Act which will enable a foreign country or the International Criminal Court to locate suspects or witnesses in Sri Lanka or to obtain evidence they need from Sri Lanka.  The UN Human Rights Commissioner has already requested Western countries to institute legal action in their respective countries against members of the Sri Lankan armed forces suspected of war crimes under the concept of universal jurisdiction.

If the yahapalana cabal had won the 2019 presidential election, they would have implemented all this and finished off Sri Lanka. We need a very strong mandate at this election to conclusively defeat these conspiracies. You will recall that at the end of 2018 when the yahapalana government began to break up, diplomats of certain Western embasies sat in the visitor’s gallery in Parliament and applauded and cheered the yahapalana Speaker’s efforts to protect their investment. We must bear in mind that even though the conspirators lost the presidential election, they have not given up their quest.

My request to the people of Sri Lanka is to always have the broader picture in mind when it comes to politics. Given the threats we are up against, we will be destroyed if we fail to distinguish between what is politically important and politically unimportant. Various things can be said about the question whether social distancing was observed in the proper manner at Mr Arumugam Thondaman’s funeral or whether someone had been guilty of fixing a cricket match back in 2011. However these are not politically important matters.

The biggest problem that we had to face after President Gotabhaya Rajapaksa came into power was the Covid-19 pandemic. What is politically important is whether that major issue was handled competently. I wish to state that we are right on top in the world in controlling Covid-19. Even New Zealand is behind us. Countries like Vietnam, Hong Kong and Taiwan learnt how to contain pandemics like Covid-19 through the bitter experience of the SARS pandemic of 2003.

We have managed to bring Covid-19 under control in this manner without much experience with such diseases. As of now the only possibility of another Covid-19 outbreak in this country will be if an infected person coming from overseas somehow finds his way into the general population. If the yahapalana cabal had been in power, would they have been able to bring Covid-19 under control in this manner? If we are able to distinguish what is important from what is unimportant, and always have the broader picture in mind, our people will always be the winners.

We saw the manner in which the yahapalana cabal made a hue and cry about a comment made by Karuna Amman to the effect that he had been responsible for the deaths of thousands of soldiers in attacks on army camps when he was in the LTTE. This shows how easy it is to obscure the broader picture by bringing other issues to the fore. After I became President in November 2005, we destroyed the LTTE completely. Because he had by that time given up both terrorism and separatism and surrendered to military intelligence, Karuna was not destroyed along with the LTTE. It was Karuna who formally identified Prabhakaran’s dead body for us.

If we look at the doings of those who are asking the people to vote for the yahapalana camp because of what Karuna said, some interesting facts emerge. Those now in the yahapalana camp gave lorry loads of weapons and gunny bags full of cash to the LTTE in 1989 in a foolish attempt to win them over. For years afterwards, the LTTE attacked us with our own weapons. In 2002, the yahapalana camp virtually ceded the Northern and Eastern provinces to Prabhakaran through the ceasefire agreement. The yahapalana government drafted a new constitution to divide the country. Then they incorporated the conceptual framework of that constitution in their 2019 presidential election manifesto as well.

From the time Karuna Amman was murdering people, and after he had given up doing so,  and right up to the present day, what has been right at the top of the yahapalana agenda has been the division of this country. Karuna may have given up murdering people, but the yahapalana cabal has not given up trying to divide the country. That is what we have to realise here. In any case, the CID is carrying out an investigation into what Karuna said. If we allow ourselves to be distracted and forget the broader picture even for a moment, the consequences could be disastrous. That is why I always stress the importance of the broader picture.

If people cast their votes on the basis of various minor distractions, we will lose everything, our country, our nationhood, our religion, our culture and the future of unborn generations. The people should always ask themselves who can rule this country effectively, ensure economic development, eliminate terrorism and ensure the security of the nation? Who can safeguard democracy by holding elections on time? Who can build a Sri Lanka where future generations will be able to live freely and be proud of? I need not spell it out, every Sri Lankan knows the answer to those questions.

May the blessings of the Triple Gem be upon you, God bless you.