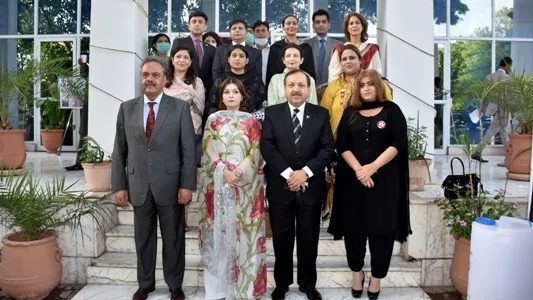 (FASTNEWS | IBD) – Speakers here at a seminar marking the ‘International Day in Support of Victims of Torture’ Friday asked the United Nations, international community and human rights organizations to pressurize the fascist Indian government having RSS mindset and following Hindutva ideology to stop the genocide of hapless people of the Indian Occupied Jammu and Kashmir (IOJK).

The seminar titled “Humans without human rights in IOJK” was organized by the Ministry of Information and Broadcasting.

The United Nations international day in support of victims of torture is observed annually on June 26 to speak out against the crime of torture, and to honour and support the victims and survivors throughout the world.

The objective of the seminar was to support the Kashmir cause by raising the voice against the state-sponsored torture of India on the innocent Kashmiris in the IOJK, especially at the time of coronavirus.

On the occasion, multiple speakers sensitized the participants about the Indian aggression in the occupied valley and renewed the vows and pledge to support the Kashmir cause through continued diplomatic, moral and political support.

Minister for Information and Broadcasting Senator Shibli Faraz, in his address, said the international media and the world community had refused to buy the Indian narrative on the Kashmir issue due to the diplomatic offensive of Pakistan Tehreek-e-Insaf government.

He said India was using state terrorism to muzzle the voice of the people of Kashmir, who had been struggling for their internationally recognized and justified right to self-determination.

The International Human Rights Commission had exposed Indian atrocities in its reports, whereas the United Nations Security Council had met over Kashmir thrice after August 5 last year and reiterated that Kashmir issue would be resolved under the UN Charter in light of its resolutions, he added.

“We fully agree with UN Secretary-General Antonio Guterres’s statement that torturers must never be allowed to get away with their crimes, and systems that enable torture should be dismantled or transformed,” Azad Jammu and Kashmir President Sardar Masood Khan, who could not attend the conference due to unavoidable circumstances, said in a video message.

He called upon the United Nations and the civilized world to help end the cruelest, inhumane and degrading treatment of the Kashmiris in the occupied territory.

Federal Secretary Information and Broadcasting Akbar Hussain Durrani said the international community should realize the gravity of situation in the IOJK and take immediate steps to pressurize India to stop gross human rights violations in the territory.

He said the seminar was not only a manifestation of the Pakistani nation’s commitment to the Kashmir cause but also a testimony for their unflinching support for the Kashmiri people’s struggle for their right to self-determination. Pakistan was in fact seeking justice for the hapless Kashmiri victims of Indian aggression, he added.

Human Rights Activist Mushaal Hussein Mullick passionately called for an unconditional release of the Indian Occupied Jammu and Kashmir’s (IOJK) leadership from the jails to ensure safety of their lives amid the coronavirus pandemic.

She demanded the unconditional release of all the prisoners, locked up in the Indian jails, including the Kashmiri women, children and elderly citizens.
South Asian Strategic Stability Institute (SASSI) University Chairperson Dr Maria Sultan, in her speech, highlighted the current Kashmir situation and its implications on the Kashmiri people and the region.

Maria said by abrogating articles 370 and 35-A India had usurped all the rights of Kashmiri people.  Even today extrajudicial killing of three innocent Kashmiris was committed by the trigger-happy Indian Army in the IOJK, she added.

A 10-minute long documentary was also screened during the seminar to highlight the decades-long freedom struggle of Kashmiris. Ordeals of the victims of torture and locals were also showed, narrating their mental and physical agony under the Indian subjugation. (Associated Press of Pakistan)