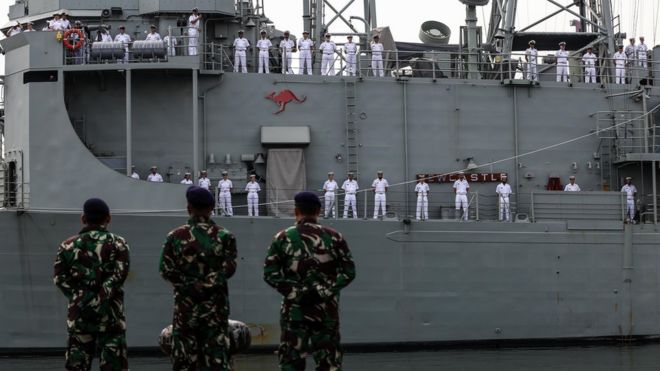 Australia says it will significantly increase military spending and focus on the Indo-Pacific region amid rising tensions between the US and China.

He said Australia would acquire long-range missiles and other capabilities to “deter” future conflicts.

It was necessary because the region was the “focus of the dominant global contest of our age”, he added.

Mr Morrison named several areas of tension including the border between India and China, and conflict over the South China Sea and East China Sea.

It follows deteriorating relations between Australia and China – which are widely seen to be at their worst in decades.

What is Australia spending money on?

The new defence capability budget – about 2% of GDP – replaces a previous decade-long strategy, set only in 2016, which had set aside A$195bn.

Mr Morrison said much spending would go to upgrading arms and equipment.

Australia will purchase from the US Navy up to 200 long-range anti-ship missiles, which can travel up to 370km (229 miles). It will also invest in developing a hypersonic weapons system – missiles which can travel thousands of kilometres.

Up to A$15b would be spent on cyber warfare tools – which the prime minister noted “says a lot about where the threats are coming from”.

Last month, he warned that Australian institutions and businesses were being targeted by cyber attacks from a “sophisticated state actor”. The remarks were broadly interpreted as aimed at China.

Why does Morrison say this is necessary?

He said tensions between the US and China had accelerated in recent years and their relations now were “fractious at best”.

The pandemic had worsened these tensions and put the global security order at its most unstable point in decades. The region was also seeing “military modernisation” at an unprecedented rate, he said. BBC