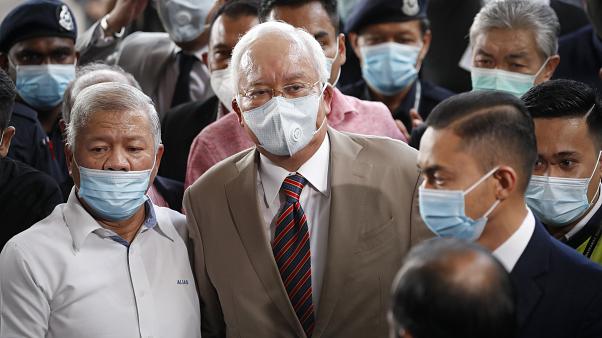 Former Malaysian PM guilty on all charges in corruption trial

He had pleaded not guilty to the charges of criminal breach of trust, money laundering and abuse of power.

The case was widely seen as test of Malaysia’s rule of law and anti-corruption efforts.

The scandal around Malaysia’s 1MDB sovereign wealth fund has uncovered a global web of fraud and corruption.

Tuesday’s verdicts centred on 42 million ringgit ($10m, £7.7m) transferred from the fund to the then-prime minister’s private accounts. Najib was in office from 2009 to 2018.

“After considering all evidence in this trial, I find that the prosecution has successfully proven its case beyond a reasonable doubt,” judge Mohamad Nazlan Mohamad Ghazali told the Kuala Lumpur High Court.

Najib denies all wrongdoing and says he was misled by financial advisors – in particular fugitive financier Jho Low who has been charged in both the US and Malaysia.

The charges he was found guilty on carry as much as 15 to 20 years each. Before the verdict, he said he would appeal if found guilty.

The 1 Malaysia Development Berhad (1MDB) fund was set up in 2009, when Najib Razak was prime minister, to aid the nation’s economic development.

In 2015, questions were raised around its activities after it missed payments owed to banks and bondholders.

Malaysian and US authorities allege that about $4.5bn was illicitly plundered from the fund and diverted into private pockets.(BBC)