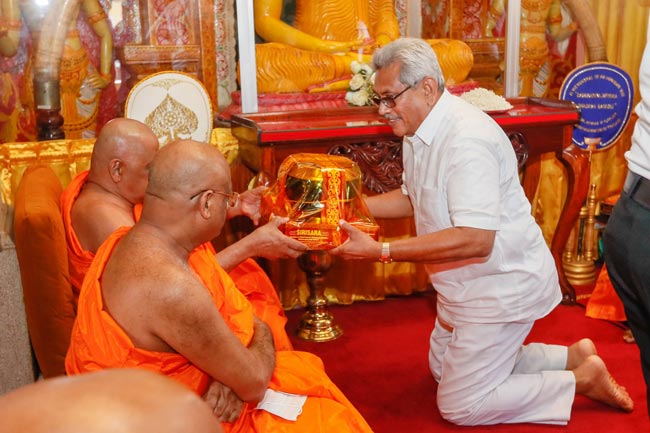 This is the first time in history where the state leader and the cabinet had visited the Mahanayaka Theros of the tri-sect on the same day of their appointment to ministerial portfolios, according to the President’s Media Division.

Accordingly, Mahnayaka of the Malwatta Chapter, Most Ven. Thibbatuwawe Sri Sumangala Thera, Anunayakas Most Ven. Niyangoda Vijitha Thera, Most Ven. Dimbulkumbure Wimaldhamma Thera, Registrar Most Ven. Pahamune Sri Sumangala Thera and the other members of the Sanga Council invoked blessings upon the President and the ministers led by the Prime Minister during their visit to Malwathu Maha Vihara yesterday.

Anunayake Most Ven. Niyangoda Vijitha Thera said that the citizens had mandated overall power to the President and government to move forward independently at the general election. The Anunayake Thero requested them to understand it properly and act accordingly. The Anunayake Thero also invoked blessings to overcome challenges they will face.

During his Anushasana, Most Ven. Anamaduwe Dhammadissi Nayaka Thera stated that it is fortunate to elect a duo who loves Sri Lanka. The Thero also praised the scientific method applied to appoint both ministers and the state ministers.

The Most Venerable Napana Pemasiri Thera, the Mahanayake of the Ramanna Maha Nikaya stated that he will invoke blessings on the new government including the President and the Prime Minister to serve the country and the nation.

The Mahanayake Thera made these remarks invoking blessings on the President, the Prime Minister and the Cabinet of Ministers when they visited the Menikhinna Hurikaduwa Vidyasagara Pirivena.

Most Ven. Ankumbure Premawansa Thera, the Anunayake of the Ramanna Maha Nikaya pointed out that the Piriven education has not been given its due recognition in the recent past.

Most Ven. Premawansa Nayaka Thera said that with the new initiatives being carried out by the President and the Prime Minister, the country has been given a new lease of life and further said that both leaders can foresee what the country needs. The Thera said that the new Ministers have been given the responsibility to promote Sri Lanka’s unique identity.