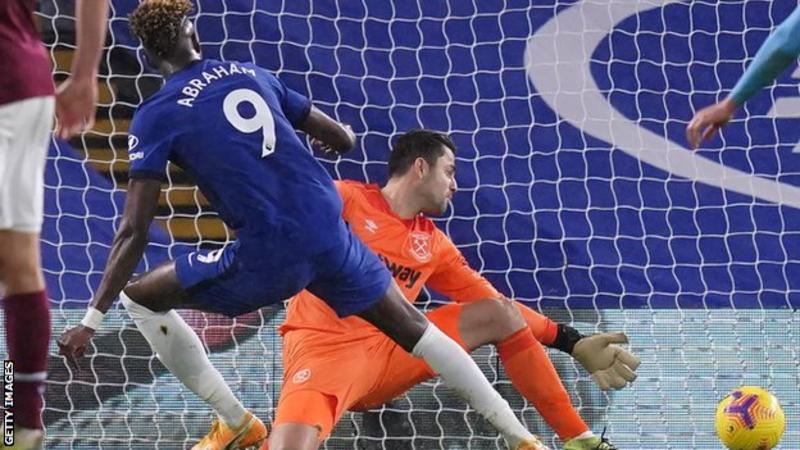 (FASTNEWS | COLOMBO) –  Tammy Abraham scored twice as Chelsea ended their recent mini-slump by beating West Ham United at Stamford Bridge to move up to fifth in the Premier League.

Back-to-back defeats had seen the Blues slip down the table but they made the ideal start on Monday as Thiago Silva powered home a header in the 10th minute.

Timo Werner spurned a couple of good chances to add to the hosts’ lead but he played his part in his side’s second 12 minutes from time as his scuffed shot was turned in by Abraham.

The Chelsea striker, back in the side in place of Olivier Giroud, then netted another barely two minutes later when he was in the right place to pick up the loose ball and curl home after Christian Pulisic had missed a simple header from a cross.

The scoreline somewhat flattered Chelsea with West Ham having been the better side for large periods, but the visitors paid the price for a lack of a cutting edge as they finished the game without a shot on target.

Victory means Chelsea have 25 points – one behind fourth-placed Everton – while West Ham remain 10th on 21 points.

“We’d dropped off slightly and it was important in this game we came back,” said Chelsea boss Frank Lampard. “There were loads of things for the team to show their character – we want more.”

An ankle injury to left-back Ben Chilwell, which saw him come off early in the game, was a minor blemish on the evening for Lampard, who also has right-back Reece James out with a knee problem.

“We hope both their injuries are not that bad and they will be in and around it for those Christmas fixtures,” he said.