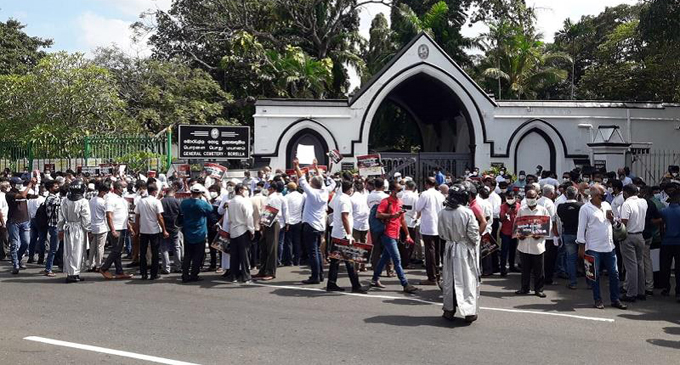 (FASTNEWS | COLOMBO) – A peaceful protest was staged opposite the cemetery in Borella today (23) against the forced cremations of Muslim who were tested positive for COVID-19.

A number of people gathered outside the cemetery and held placards and posters during the protest. The protesters also held images of the 20-day-old child who was among those cremated by the Health Authorities in Colombo.

The protesters lined up near the entrance of the cemetery and staged the peaceful protest.

Opposition Leader Sajith Premadasa, former Minister and Leader of the All Ceylon Makkal Congress (ACMC), Parliamentarian Rishad Bathiudeen, other members of the Opposition, and several others attended the protest.

Silent Protest Against the Cremation of #COVIDー19 affected Muslim Bodies. We stand for justice.#StopForcedCremations #SriLanka pic.twitter.com/fhXSvqgeNe

Muslims are protesting the Government’s policy to cremate the bodies of victims who were tested positive for COVID-19 despite the World Health Organisation (WHO)’s guidelines stating victims could be buried or cremated.

The policy has been challenged by Muslims, with 12 petitions filed by the minority community and civil society groups in the Supreme Court.

But the Top Court rejected the petitions, without giving reasons why it made that decision.

Similar protests have also taken place in France and the United Kingdom (UK) against the forced cremations of Muslim who were tested positive for COVID-19.