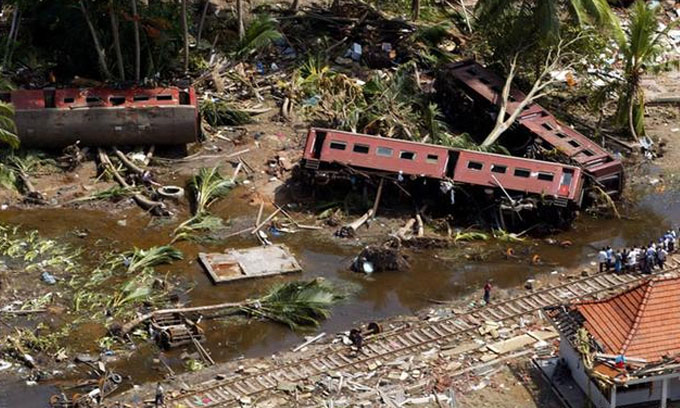 (FASTNEWS | COLOMBO) – Today (Dec. 26) marks 16 years since the deadly Boxing Day Tsunami of 2004 that left a trail of destruction and shocked the entire world with thousands of lives lost to the catastrophe.

Two minutes of silence will be observed on Saturday (Dec. 26) starting from 9:25 a.m. in remembrance of the lives that were lost during the disaster.

Sunday, 26th December 2004 remains unforgettable for all Sri Lankans as the ‘Boxing Day Tsunami’ caused by a series of earthquakes severely destroyed the coastal belt of the island.

The Sumatra–Andaman earthquake on 26th December 2004, with a magnitude of 9.1 on the Richter scale in the sea near Sumatra, Indonesia, created a series of massive tsunami waves that struck Sri Lanka and neighboring states India, Indonesia, the Maldives, and Thailand, among others.

An estimated figure of more than 227,000 people along the surrounding coasts of the Indian Ocean lost their lives, making the 2004 Boxing Day Tsunami the deadliest natural disaster in the 21st century, according to foreign reports.

Since many Sri Lankans did not have any previous experience with a natural disaster of this kind, the damage was beyond imagination with thousands displaced and killed within a short time.

The impact of the Tsunami which struck in 2004, continues to live on, even 16 years since the devastation.