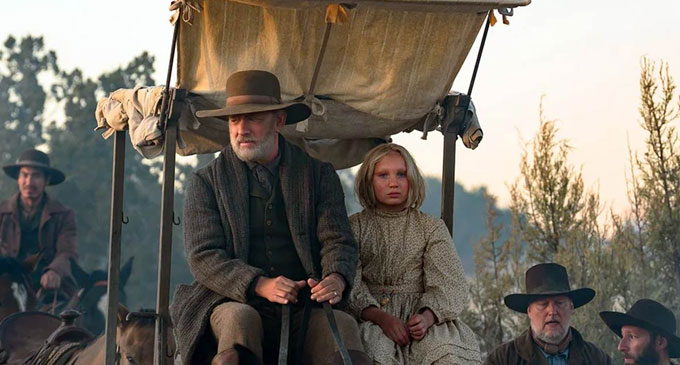 (FASTNEWS | COLOMBO) – The western gets a slightly revisionist spin in “News of the World,” a film starring Tom Hanks that’s really the same plot as “The Mandalorian,” just without the armor. Despite an action-filled trailer, director/co-writer Paul Greengrass’ movie is only fitfully eventful, relying heavily on the grudging relationship formed between Hanks’ taciturn vagabond and his unlikely young charge.

Set five years after the Civil War, Hanks plays Captain Jefferson Kyle Kidd, a grizzled veteran who now ekes out a living traveling from town to town, entertaining crowds by reading and summarizing newspaper articles highlighting stories from around the globe.

Recognizing that his audience lacks the time or ability, think of him as an early news aggregator, culled from a rich tradition of storytelling. Kidd presents it as a way to “escape our troubles,” though lingering division and psychic wounds from the war – including his own — fester not far below the surface.

In the starkest example, Kidd plies his trade at an encampment where the business mogul presiding over the place wants him to lie to his audience in order to keep them more pliable. Think “fake news,” only without the digital megaphone.

If that sounds a bit uncomfortably like the US as it stands 150 years later, that’s no accident. Greengrass (of “United 93” and the Jason Bourne movies, who previously directed Hanks in “Captain Phillips”) has a history of slipping social and political commentary into his films.