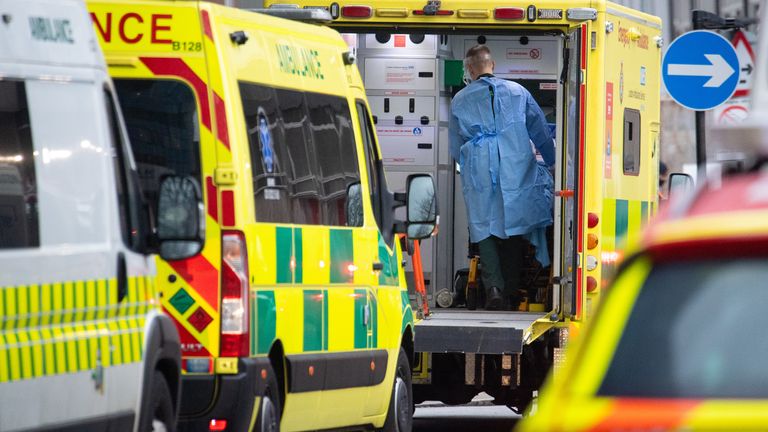 (FASTNEWS | COLOMBO) –  The UK has reported a further 1,041 people have died with coronavirus, the highest daily death toll since April.

It came as 62,322 new cases were recorded, the highest daily rise since mass testing began, and as MPs supported England’s lockdown.

There are 30,074 Covid patients in UK hospitals, he said, as an ambulance trust told of severe pressure.

Current patient numbers are 39% higher than the previous peak on 12 April last year, when 21,684 were in hospital.

The number of those who died within 28 days of a positive test in the past week is 37% higher than the previous seven days.

Andrew Hayward, a professor of infectious diseases, said the number of deaths could continue to increase for the next few weeks.

He explained deaths “lag two or three weeks behind the number of cases in the community, and those have been increasing”.

Prof Hayward, who is also a government science adviser, added: “I think the lockdown measures will turn that number of deaths around but it is going to take a little while.”

Mr Hancock told MPs the consequences of inaction could be similar to scenes elsewhere in the world – of overrun hospitals and doctors choosing “who to treat and who to turn away”.

“If we don’t act now, we know that eventually the NHS would not be able to cope,” he said.

West Midlands Ambulance Service experienced its busiest-ever day on Monday, handling 5,383 emergency calls due to a combination of Covid-19 pressures and winter weather.

And hospitals in Greater Manchester are in danger of “falling over” as cancer operations risk being cancelled, Manchester City Council’s leader Sir Richard Leese said.

All of the UK is now under strict virus curbs, with Wales, Northern Ireland and most of Scotland also in lockdown.

While England’s lockdown became law at midnight, MPs voted overwhelmingly – by 524 to 16 – in support of the tougher measures on Wednesday evening.

Labour backed the restrictions but 12 Conservative MPs rebelled to vote against.

Speaking during the Commons debate, Health Minister Helen Whately said although the regulations allowed the lockdown to be in place until the end of March, the government did not expect it to continue until then.

Instead, the plan was for a “steady, controlled and evidence-led move down through the tiers on a local basis” to exit lockdown.

Most agree they are needed now, even if they do not like them.

The start of the vaccination programme does seem to have changed the political landscape too.

This vote means the government will not have to face MPs again on these restrictions until March.

The questions from some Tory backbenchers suggest there will be pressure on the government to start lifting them long before then though – perhaps as soon as next month if the vaccination programme goes to plan.

MPs have also indicated they will be watching its progress with close attention.