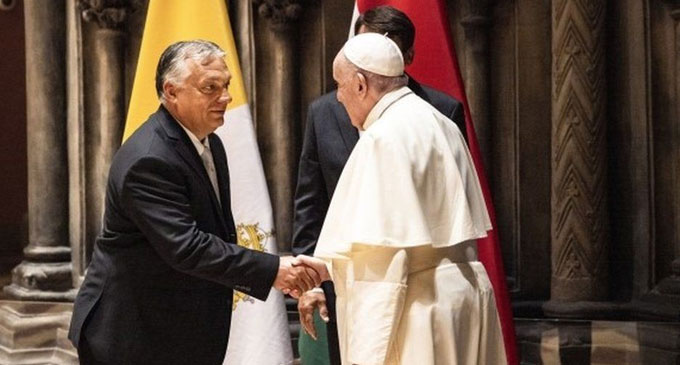 (FASTNEWS |   HUNGARY) – Pope Francis has held a meeting with Hungary’s populist Prime Minister Viktor Orban during a short trip to the capital, Budapest.

Details have not been released but the meeting was expected to highlight differences between the pontiff’s views on refugees and Mr Orban’s nationalist and anti-immigrant policies.

The Pope will celebrate Mass and then spend three days in Slovakia.

It is his first international trip since surgery earlier this year.

Mr Orban’s office posted pictures of him shaking hands with Pope Francis at the Museum of Fine Arts.

Some of the PM’s supporters in Hungary, along with pro-Orban media, have in the past mocked the Pope as “anti-Christian” for his comments on helping refugees.

The Pope has previously criticised political leaders who tried to erect barriers to keep migrants out, and in 2019 donated money to help migrants in Mexico seeking to reach the US border.

But some of the worshippers gathering for the Mass said they were setting this aside.

Eva Mandoki, 82, told Agence France-Presse: “We are not here for any politics, but to see and hear the Pope, the head of the Church. We can hardly wait to see him.”