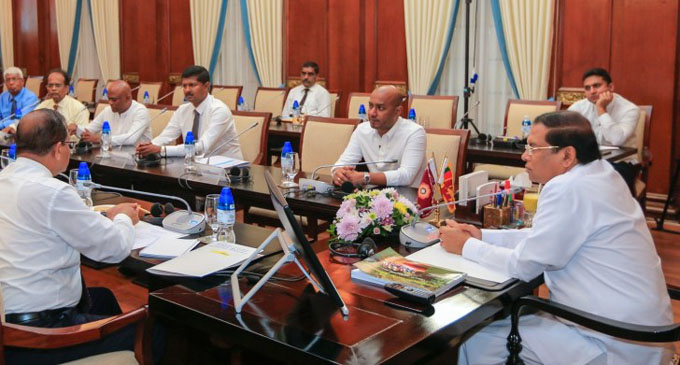 (FASTNEWS|COLOMBO) – President Maithripala Sirisena says a speedy process need to control the flooding around the city of Colombo and the surroundings of the Kelani river.

He made these remarks during a meeting held at the Presidential Secretariat, on Friday (12) regarding a project proposal on mitigating flooding in the areas of left bank of the Kelani river and the city of Colombo.

This project proposal was submitted by a former senior adviser at the Ministry of Disaster Management Mr.K.D.A.M. Nanayakkara and during this meeting the attention was drawn regarding the implementation of this project.

The project report was compiled following a study conducted regarding the flooding situation affected to the areas of Colombo and adjacent areas in the years of 2008, 2009 and 2016.

President Sirisena has given instruction to appoint a committee comprising of all the representatives of the relevant institutions and further instructed to present the project report to the Cabinet for the approval.

Minister Duminda Dissanayake, Mayor of Kaduwela Buddhika Jayavilal, Mayor of Kotte Madura Vitanage, Secretaries to the Ministries and others participated on this meeting.