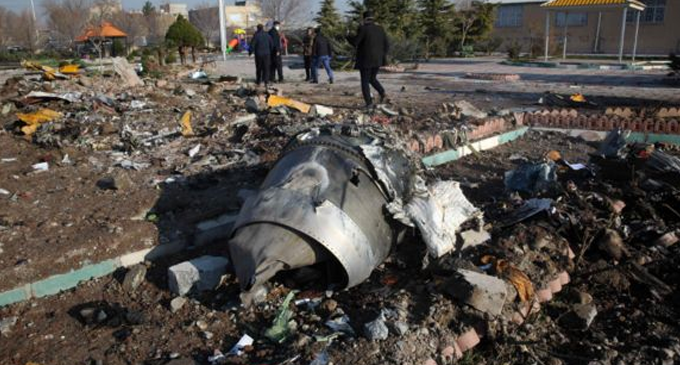 “Scientifically, it is impossible that a missile hit the Ukrainian plane, and such rumours are illogical,” – Iran

The leaders of Canada and the UK called for a full and thorough investigation into the crash, which killed all 176 people on board.

Iran has ruled out a missile strike by its air defences.

The crash came just hours after Iran carried out missile strikes on two airbases housing US forces in Iraq.

US media have speculated that the timing of the crash suggests the plane may have been mistaken for a US warplane as Iran prepared for possible US retaliation for the strikes.

CBS News quoted US intelligence sources as saying a satellite detected infrared “blips” of two missile launches, followed by another blip of an explosion.

US President Donald Trump said on Thursday that he had “suspicions” about what happened to the plane.

Amid tensions heightened by the US killing of top Iranian general Qasem Soleimani on 3 January, Iran has said it will not hand over the recovered black box flight recorders to Boeing, the plane’s manufacturer, or to the US.

However, Iran’s Foreign Ministry has invited Boeing to take part in the official inquiry into the crash.

Under global aviation rules Iran has the right to lead the investigation, but manufacturers are typically involved.

Iranian TV pictures later in the day showed the crash site being bulldozed.

What is being said about the possible missile strike?

Canadian Prime Minister Justin Trudeau said he had received intelligence from multiple sources indicating that the plane was shot down by an Iranian surface-to air missile, adding that it was possible that this was unintentional.

“This reinforces the need for a thorough investigation,” he said. “Canadians have questions and they deserve answers.”

But he said it was too early to apportion blame or draw any conclusions, and refused to go into detail about the evidence.

A total of 63 Canadians were on the flight, along with dozens of others who were expecting to fly on to Toronto from Kyiv.

Speaking in Canada, UK Foreign Secretary Dominic Raab said British nationals were advised not to travel to Iran, “given the body of information that UIA Flight 752 was shot down by an Iranian surface-to-air missile, and the heightened tensions”. 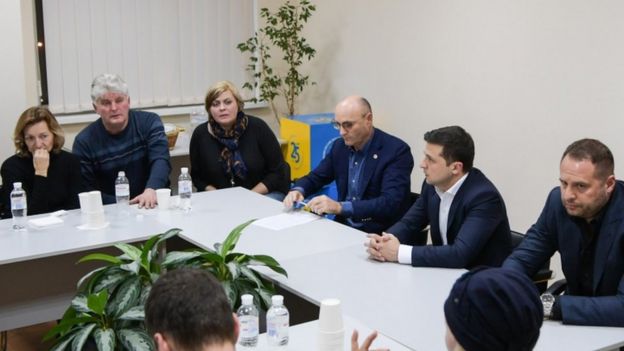 Ukraine’s president met the relatives of crew members on Thursday

Meanwhile, Newsweek quoted US and Iraqi officials as saying they believed the aircraft was hit by a Russia-built Tor M-1 surface-to-air missile system.

Two Pentagon officials had assessed that the incident was accidental, Newsweek added.

It quoted sources as saying that Iran’s anti-aircraft systems were probably active following its attacks on the US airbases.

The Pentagon has so far made no public comment on the issue.

When asked what he thought had happened to the plane, President Trump answered: “I have my suspicions. It’s a tragic thing when I see that, it’s a tragic thing. But somebody could have made a mistake on the other side.”

Earlier on Thursday, Oleksiy Danylov, the secretary of Ukraine’s security and defence council, said in a Facebook post (in Ukrainian) that three other possible crash causes were being considered: 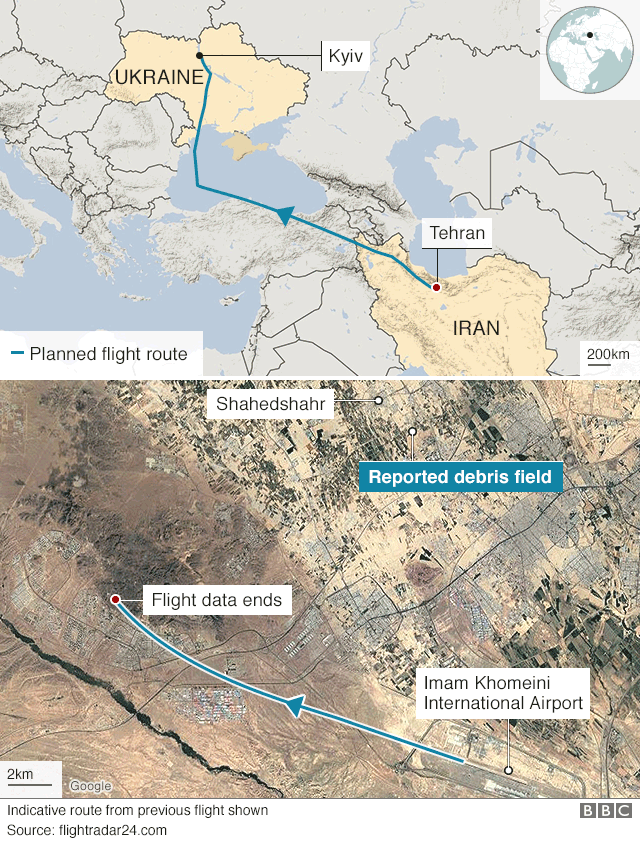 Mr Danylov said Ukrainian investigators, who are already in Iran, wanted to search for possible debris from a missile at the site of the crash. Iran is known to have Russian missile defence systems.

What does Iran say?

Iran’s Civil Aviation Organisation (CAOI) chief Ali Abedzadeh said: “The plane, which was initially headed west to leave the airport zone, turned right following a problem and was headed back to the airport at the moment of the crash.”

Mr Abedzadeh added that witnesses saw the plane “on fire” before the crash, and that pilots had not made any distress calls before trying to return to Imam Khomeini airport.

“Scientifically, it is impossible that a missile hit the Ukrainian plane, and such rumours are illogical,” he said.

“All those countries whose citizens were aboard the plane can send representatives and we urge Boeing to send its representative to join the process of investigating the black box,” he said. (Courtesy – BBC)