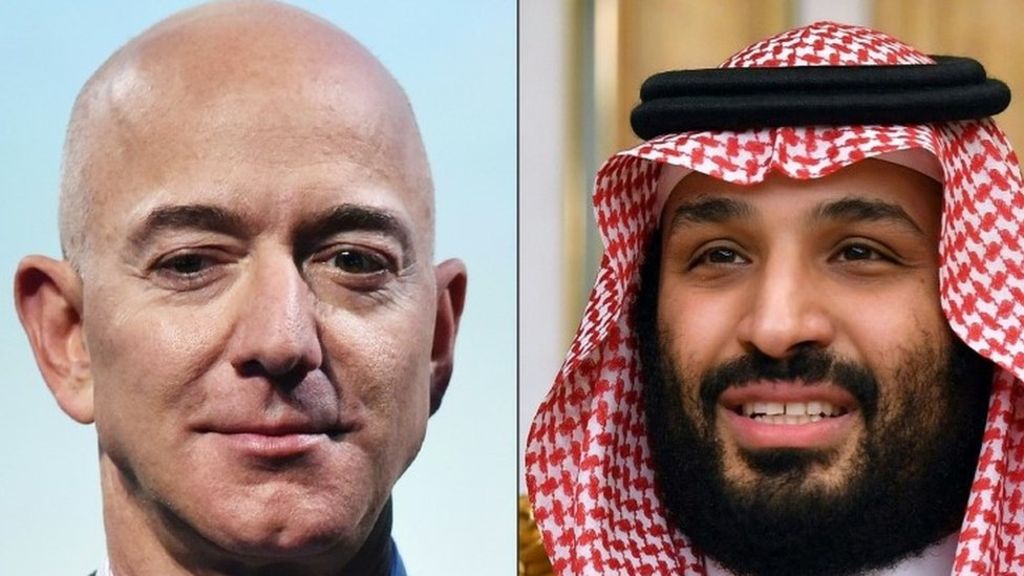 They said Mohammed bin Salman should also be investigated for “continuous, direct and personal efforts to target perceived opponents”.

A message from a phone number used by the prince has been implicated in a breach of Mr Bezos’s data.

The kingdom’s US embassy has denied the “absurd” story.

Relations between Saudi Arabia and Mr Bezos – who also owns the Washington Post – worsened after Jamal Khashoggi, a prominent critic of the Saudi government and one of the newspaper’s staff, was murdered in the Saudi consulate in Istanbul in 2018.

Mr Bezos’s phone was hacked after he received a WhatsApp message in May 2018 that was sent from the crown prince’s personal account, according to the Guardian newspaper, which broke the story.

An investigation into the data breach reportedly found that the billionaire’s phone began secretly sharing huge amounts of data after he received the encrypted video file.

What did the experts say?

In a statement, Ms Callamard and Mr Kaye said: “The information we have received suggests the possible involvement of the crown prince in surveillance of Mr Bezos, in an effort to influence, if not silence, the Washington Post’s reporting on Saudi Arabia.”

It said the allegations reinforced “other reporting pointing to a pattern of targeted surveillance of perceived opponents and those of broader strategic importance to the Saudi authorities”.

The experts linked the case heavily to the Khashoggi murder, saying the Post reporter’s phone had been hacked at the same time as Mr Bezos’s.

They said there had been “a massive, clandestine online campaign against Mr Bezos and Amazon, apparently targeting him principally as the owner of the Washington Post”.

The statement also called for “rigorous control” of the “unconstrained marketing, sale and use of spyware”.

How did the alleged hack take place?

The UN experts cited “a 2019 forensic analysis of Mr Bezos’ iPhone that assessed with ‘medium to high confidence’ that his phone was infiltrated on 1 May 2018 via an MP4 video file sent from a WhatsApp account utilised personally by Mohammed bin Salman”.

The crown prince and Mr Bezos had reportedly exchanged numbers a month earlier and within hours of the MP4’s arrival, there was a “massive and unprecedented exfiltration of data” from Mr Bezos’s phone.

The analysis cited by the experts says the crown prince then “sent WhatsApp messages to Mr Bezos… in which he allegedly revealed private and confidential information about Mr Bezos’ personal life”.

Private information was then leaked to the American tabloid, the National Enquirer. In February 2019 Mr Bezos accused it of “extortion and blackmail” after it published text messages between him and his girlfriend, former Fox television presenter Lauren Sánchez.

A month earlier he and MacKenzie Bezos, his wife of 25 years, had announced that they planned to divorce having been separated for a “long period”.

What have the Saudis and Bezos said?

The Twitter account of the kingdom’s US embassy issued an outright denial of the allegations against the crown prince.

“We call for an investigation on these claims so that we can have all the facts out,” the embassy said.

Mr Bezos has made no response to the UN experts’ statement, but did tweet an image of himself with Khashoggi’s fiancée, along with the tag #Jamal: